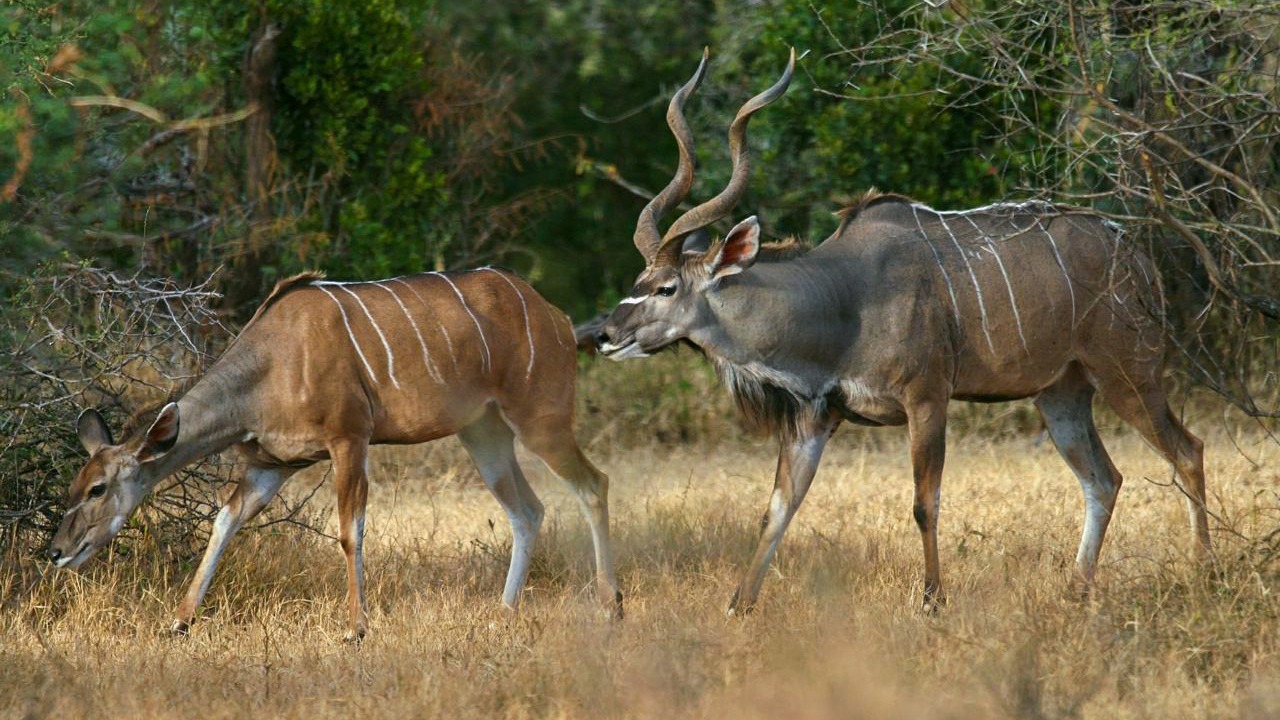 Scientifically referred to as Tragelaphus strepsiceros, the greater Kudu is a woodland antelope known to thrive in southern and eastern Africa including Uganda where it is explored on wildlife safaris in Uganda.

The greater Kudu together with the lesser Kudu are the sub-species of Kudu and though it is recorded to feature a wide spread territory, its population is sparsely distributed due to habitat loss and poaching.  The Greater Kudus feature narrow bodies with long legs while their coats range from brown to reddish brown with 4 – 12 vertical white stripes along their torso as viewed on Africa holiday Safaris including Uganda Safaris and Tours. The head of the Greater Kudu is relatively darker than other body parts.

The bulls of Greater kudu are notably larger compared to the cows and do a lot of vocalisation using low grunts, humming and clucks along with gasping. The male Greater Kudus feature large manes that run along their throats and the large horns featuring 2 ½ twists. The bulls start to grow the horns between 6 – 12 months of age while twisting occurs when they reach 2 years of age and full twisting occurs at 6 years of age as encountered by travellers on safari in Uganda Africa.

The habitats of Greater Kudu cover mixed scrub woodlands and would avoid open plains in fear of predators. They feed on grass, leaves and shoots and rarely on roots, tubers and fruits. They are active early in the morning and late afternoon and secure water from water holes or bulbs and roots with high water content. It can be noted that though the greater Kudus normally thrive in one area, they can stretch to a large distance in search of water especially during dry seasons.

Regarding reproduction, the Greater kudus attain the sexual maturity between 1 – 3 years and gestation period lasts about eight months after which a single calf (or rarely two calves) is born. Their lifespan is 7 – 8 years in the wilderness but can stretch up to 23 years in captivity.

Regarding the conservation, the Greater Kudu is listed as species of Least Concern on the red list of International Union for Conservation of Nature (IUCN).  In Uganda, the Greater Kudu can be explored in the Uganda tour destination of Kidepo National Park to the north west of the country.