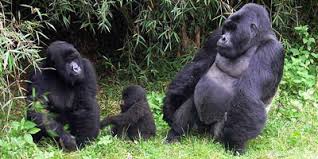 Bwindi impenetrable National park is one of the gifted parks that one would always wish to encounter on Uganda safari. Bwindi is famously known for its gorilla tracking activity which takes place in its four main regions namely; Rushaga, Buhoma, Ruhija and Nkuringo.

Bwindi Impenetrable national park contains a half of the population of worlds endangered mountain gorillas leaving a few to the adjacent gorilla safari parks of Mgahinga in Uganda, Volcanoes National Park in Rwanda – famous on Rwanda safari and Virunga National Park in the Democratic republic of Congo. It contains twelve (12) habituated gorilla families of which eleven (11) are designated for gorilla trekking while undertaking a safari in Uganda.

Habinyanja gorilla family is found in Buhoma area in the northern part of Bwindi and was habituated for tracking by travellers on gorilla safari in 1997 and the first encounter with humans was in 1999. It has been having 18 members with two silver backs but now its great news to hear that a new born baby has been added to the family. Thanks to the conservation efforts backed by facilitation gathered through organizing gorilla tracking activity which has ensured the safety of these gorillas leading to their increase in number. This sends a good signal for sustainability and long term gorilla safaris to Uganda.