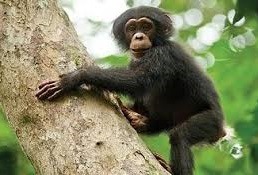 Most Uganda safari undertakers are used to chimpanzee trekking activity that involves one hour face to face interaction with these close to human species. This is well with time constrained travellers who also want to encounter other activities like gorilla tracking .

However, some travellers have some good time at their disposal that can allow them to undertake a whole day chimpanzee habituation experience. This is an amazing activity that commences off early before dawn in the company of the ranger guide to head into the forest to catch up with chimpanzees leaving their nests. The activity is by no means easy encounter but can be regarded as an adventure since it involves spending the whole day in the wilderness as you depart with your breakfast and lunch to sustain you throughout the day.

Gazing at Chimpanzees as they disintegrate their previous night’s nests, setting off for feeding on the beautiful and nutritious fruits amidst their sounds, playful young chimps and finally watching them as they put up new nests for sleeping is such amazing safari activity that will fill your memory, generate for you countless photos in your camera thus prompting you not to leave it out while planning your safari to Uganda. This chimpanzee habituation activity is best done in March, April, May and November when the traffic is low.