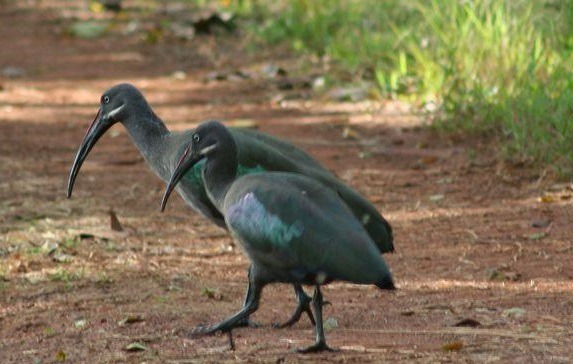 Scientifically referred to as Bostrychia hagedash, the Hadada ibis is one of the Uganda Safari bird species known to thrive in the Sub Saharan Africa.

Hadada Ibis is noted to be a large bird species stretching to 76cm in length with grey to brown colouring. The bird species feature white, narrow and relatively horizontal stripe around its cheeks which is at times called Moustache though it doesn’t reach the bird’s mouth corners. The bird’s plumage over its wings has a purple sheen while the legs are blackish in color. The bill has grey to black colouring with the upper mandible featuring a red stripe while the wings are broad and powerful facilitating quick take offs along with easy manoeuvring through dense tree cover as always explored on adventure vacation safari tours in Uganda Africa.

The Hadada Ibis feature an exceptionally distinctive and loud call “haa-haa-haa-de-dah” from which it derives its naming. The bird species normally make the call while flying or troubled and can do it in social communication. A single “haaaa” is always heard when the Hadada Ibis is roosting and when foraging, call sounds as a low growl like that of a young puppy. Birders on safaris in Uganda have always had chances of enjoyoing this experience.

With their large mouth and long bill, the Hadada Ibis majorly feeds on earth worms which they extract from soft soil along with larger insects, lizards and spiders.  This bird species are common at green fields like golf courses as they prefer to feed on larvae of moths along with beetles that feed on roots of grass.

Regarding the habitat, the Hadada Ibis thrives across the Sub Saharan Africa in wetlands, savannah and open grasslands. They can as well be viewed in urban parks, green corridors, school fields and expanse gardens. Besides Uganda, the bird species can as well be explored in Burundi, Tanzania, Ethiopia, Cameroon, Democratic Republic of Congo, Sudan, Gabon, Senegal, Kenya, Gambia, Mozambique, South Africa, Zimbabwe, Somalia and Botswana.

The International Union for Conservation of Nature (IUCN) lists the Hadada Ibis as least concern because they are still widely spread.  Travellers on Uganda safari Holidays have the opportunity to view this bird species as it thrives across National Parks and other wilderness areas and peri-urban environments.