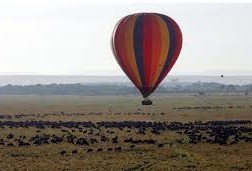 Uganda has for long been capitalizing on gorilla trekking safaris and wildlife safaris as the prime tourist packages in her range of National Parks like Bwindi Impenetrable National Park, Queen Elizabeth, Murchison Falls and Lake Mburo National Park. Little efforts have been directed at product diversification thus keeping the tourist experience narrowed to the above encounters.
The potential of culture and heritage attractions alongside the opportunities presented by social events, festivals, conferences and incentives are apparently highlighted by the tourism developing and marketing agencies both from public and private sector to widen the scope of tourist products so as to increase the number of travellers that plan safari tours to Uganda.
As the innovations keep on arising from different angles, the hot air balloon initiative has made its self to Uganda with its pioneer project in Queen Elizabeth National Park which is the most visited Uganda safari park. The proprietor of this initiative has acquired a valid operating license from the National regulatory Authority – Civil Aviation Authority, has a professional pilot with 1000 hours minimum experience in flying hot air balloons of various types and sizes in countries of Turkey and Egypt, covered by British Insurance Company via UAP worth 500000 USD and a Kubicek balloon which is a brand of Czech Republic. This demonstrates the zeal and the might of this new tourist product.
The balloon which apparently has the capacity of taking 16 travellers on safari in Uganda will be complimented by a second balloon in three weeks’ time having the capacity of taking up to 24 tourists. The activity that will enable travellers to explore the amazing savannah landscapes of Queen Elizabeth National Park with its counts of lions, elephants, buffaloes, and a range of antelopes among other wildlife will be commencing in the early morning at 05:30 am where the crew including pilot, travellers and the balloon will assemble and start moving in order to get the right spot for taking off considering the wind direction. After ascertaining the right spot, the guests will be served coffee, tea and refreshments as they watch the balloon being unloaded and assembled with cold inflation taking place followed by hot inflation after which the guest will attend to short safety briefing before commencing the flight.
The flight will be lasting about an hour flying in various elevations in line with the direction of wind allowing the guests to enjoy the views of Queen Elizabeth National Park at a height of 3000 feet. As the balloon flies, the safari vehicles will be following it on the ground so as to pick the guests after landing. After landing, a non-alcoholic juice sparkling celebration will be made and certificates issued which is a unique encounter to have while on a safari holiday in Uganda. The hot air balloon encounter is 380 USD per person.
Uganda safaris/Uganda safari News
Prime Uganda safaris & Tours Ltd safari News.