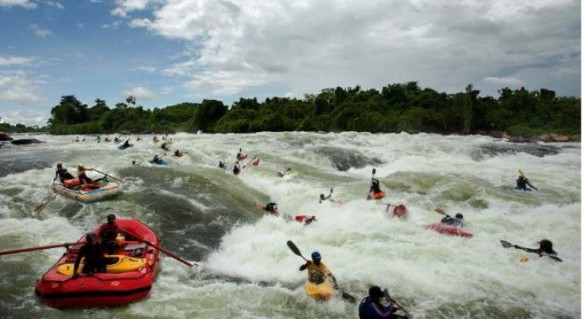 Jinja is one of the prime Uganda safari destinations commonly known for its adventure experiences including white water rafting and bungee jumping. Its great product stems from the flowing Nile River that makes its way out of Lake Victoria traversing through varying terrain including impermeable rocks that present an obstruction to the river flow leading to the formation of water falls and rapids. One of re-known features was Bujagali falls here a series of rapids obstructed characterized the Nile forming a perfect ground for adventure activities for tourists on safari in Uganda.
It is quite unfortunate to note that this magnificent feature is no more. As it is believed that man was created to be the master of other creatures, he has continued to exercise his role in modifying the earth landforms. The famous Bujagali falls was altered after the construction of electricity dam that led to the submerging of the falls and rapids. As if that is not enough, the government is planning of doing the same on Isimba water falls – something that has put the adventure Uganda safari products in Jinja at stake.
This does not only rise worries of the adventure tourists planning safaris to Uganda but also threatens the residents of Jinja whose livelihood has been centered on tourism. They had capitalized on the opportunity presented by these features and they had ventured in things like tour guiding, restaurant operation, craft shops, transport, lodging among others. Thus, the initiative of power generation that is steadily consuming all tourist sites is seen as a threat they livelihood.
Jinja has grade five rapids thus offering world class rafting that is unavailable in other neighboring countries. It is noted that kayaking and rafting attracted over 19,300 Uganda safari travellers. Thus, it can be stated that the tourist activities in Jinja provide a perfect complimentary to the Uganda’s primary products of gorilla safaris, wildlife safaris and Chimpanzee trekking safaris. They provide a competitive advantage over other countries like Rwanda and Kenya which have got gorillas and wildlife respectively.
Uganda safaris/Uganda safari News
Prime Uganda safaris & Tours Ltd safari News.