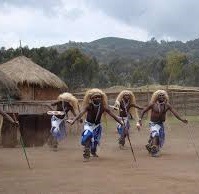 The Iby’ iwachu cultural village is a famous Rwanda safari center where the travellers undertaking safaris to Rwanda are able to encounter the Kinyarwanda Culture. Located in Musaze district in the cell of Nyabigoma adjacent to the gorilla trekking haven of        Volcanoes National Park, the Iby’ iwachu cultural village encounter is regarded as an extra activity that is always incorporated in the Rwanda gorilla safari.

Established to derive an alternative livelihood for the former poachers and the communities surrounding the Volcanoes National Park while enhancing conservation and cultural preservation, the Iby’ iwachu cultural village has lived to achieve this dream as many people of which some were former poachers are engaged in a range of activities including making of handicrafts, pottery, visitor guiding, among other things of touristic interest which in turn sustains their lives without looking for survival in the adjacent protected area that is a home of the endangered mountain gorillas which inspires travellers to plan safaris to Rwanda.

The Iby’ iwachu cultural village is a complex center where the three ethnics of Rwanda namely; the Tutsi, Hutu and Twa blend together to deliver the true experience of the traditional Kinyarwanda culture. This experience involves a guided community walk that exposes the Rwanda safari undertakers to the facsimile of the Kings house where the stories of coronation and its practices are encountered, traditional ceremonies, architecture, traditional dances – the famous Intore dance among other encounters that combine to make your safari in Rwanda a memorable one.