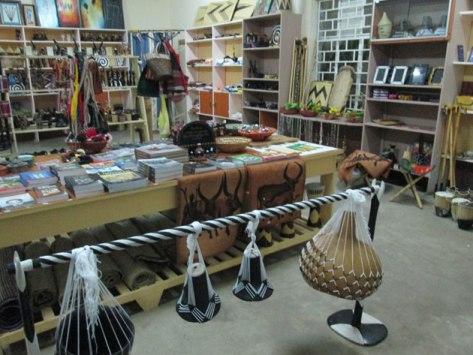 At 12km to Mbarara town, the Igongo Cultural Center has for the recent past served as a popular lunch stop for the travelers on Safari in Uganda interested in tasting the traditional African Buffet.  Its famous Kahwa Kanuzire (its finished when still sweet) restaurant has made a name world over for its standard local cuisine generated from freshly gathered food stuffs from the surrounding communities.

But, one can note that Igongo Cultural Centre is beyond a mere a lunch stop to be a Uganda tour destination in itself.  The centre is a home to the Erijukiro Museum which is the largest private museum in the whole of Uganda featuring the artifacts of all tribes of south western Uganda. The museum also features a range of historical writings, sculptures of historical personalities like Muguta y’ Butaho – the famous warrior of Buhweju, Kitami Ky’ Nyawera – the Queen of Mpororo among others which make it very exciting to visit while on your Uganda Safari tour.

Besides the Museum, the Igongo Cultural Center takes control of the great 1520AD Eclipse monument which was built on top of Biharwe Hill to commemorate the famous total solar eclipse that hit the area around that time. The Eclipse monument goes beyond the scientific part of it to incorporate great history and tradition. It is noted that the Eclipse occurred during the time when the Bunyoro Kingdom was undertaking imperialist expeditions. They had accomplished the Nkore Kingdom and all the cows had been confiscated leaving the Banyankole in a starving situation. Now, they had extended to raid the Kingdom of Rwanda and when they had reached Biharwe returning home after a successful cattle raid, a total solar eclipse occurred. The King of Bunyoro and his men could not understand what had happened and thought that it was a misfortune arising from the raided cows and as a result, they abandoned the cows and ran away towards home. A heavy down pour hit the area towards the end of the eclipse and after it, the local people (Banyankole) found many cows in place. They were so mesmerized and believed that God had sent the cows to save them from suffering and starvation. They called them “Enduga Mwiguru” literally meaning “Heaven sent”. This makes the site an incredible one that is worth inclusion while planning a safari to Uganda. Being on top of the hill, the site offers an opportunity for hill climbing adventure.

The lush gardens of Igongo Cultural center with beautiful flowers, works of art like the historical Mayenje g’ Ishinjo a cow that sparked a war between Kingdoms of Nkore and Buhweju and Ishe Katabazi – one of the most popular personalities that have ever lived in the region of Ankole among others are very suitable for relaxation and get together functions.

All these combine to make Igongo Cultural Center a great site beyond only a traditional lunch stop.