Karisimbi mountain; the glowing tower of the mountain gorillas in Rwanda

Home » Karisimbi mountain; the glowing tower of the mountain gorillas in Rwanda 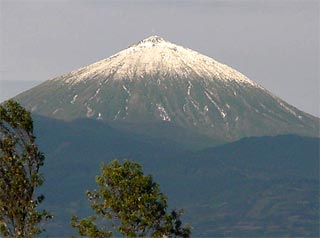 Karisimbi Mountain which is notably the highest among the eight (8) Mountains that forms the Virunga chain viewed on gorilla trekking safaris in Rwanda. The Mountain appears a huge dome apparently dormant dominating the range extensively in girth other than actually the height.
The Karisimbi Mountain derives its name from the local Kinyarwanda language which literally translates to white shell that denotes the white-capped summit. Amazingly, this white cap does not arise from snow but arise from sleet and hail that accumulates at the raised elevations from the storms. This glowing tower is positioned in the National Park of Volcanoes where the gorilla safaris in Rwanda are carried out.
The going to the top of the Karisimbi Mountain is steep enough to require careful navigation both at the slopes and also the mountain itself. The mountain features secondary vegetation and it greatly offers a sanctuary experience. The site of historical Dian Fossey a re-known gorilla conservationist who is highly paid tribute by travelers on Rwanda gorilla safaris is also perched on the ridges of the mount Karisimbi where it adjoins with the Bisoke Mountain.
The climb to the Karisimbi Mountain which towers to 4,507m presenting itself as the sixth (6th) tallest on the continent of Africa following the Mountains of Kilimanjaro, Kenya, Rwenzori, Meru and Ras Dashen ranked in order of their height beginning with the highest takes a count of two (2) days and would require a two (2) days notification of the Park Management to plan for your climb. The Mount Karisimbi which is one of the famous adventure Rwanda safari activities requires a sum of $400 and this incorporates the guide to the mountain. In case one wishes to hire the tent, they are available at $10.
The trail head to the mountain is accessed following 16km from the Park Headquarters and takes around 30 minutes to the point where the cars are left. At this point, you secure the porters who are not part of the mountaineering cost and they are usually paid Rfr5, 000 after which you embark on the mountain climbing adventure commencing at an altitude of around 2,600m above sea level.
The encounter takes you close to the site of Dian Fossey at around 2,067m above sea level which you can opt to explore at an additional cost. This is followed by exploration of a range of zones of vegetation including Bamboo and the famous wild celery at lower slopes which is liked by gorillas – the icon of gorilla safaris to Rwanda followed by the hagenia forest featuring old man’s beard moss on its branches. Appearing beyond 3,000m, the impressive giant groundsel and remarkable giant lobelia is explored before settling for day one camping at 3, 700m with magical views of Mount Bisoke.
The following day involves waking up at 5:30am and you summit the historical volcano. But, there is a price to pay in form of negotiating steeper trail section which at times gets muddy as the fog appears. At 4,000m altitude, the terrain get more challenging and becomes more exposed and as a result, you need to put on a hat and gloves and following two (2) hours of trek, you embark on the last meters walking past volcanic screem and as the wind becomes hard with visibility drop to about 25m, you ascertain that you have summited the Karisimbi Mountain.
The border of Congo is few meters away and the descend takes around 6 hours inclusive of en-route breaks. It is that magical encounter to explore the Karisimbi Mountain as part of the gorilla safari in Rwanda.