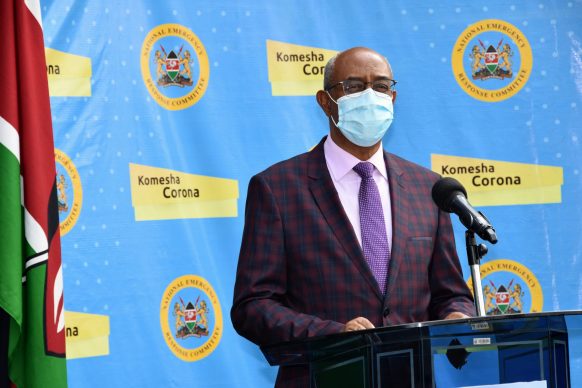 The number of positive cases in Kenya has risen to 4, 374 after the Ministry of Health Kenya announced 117 new coronavirus cases, from a sample size of 3,043, that was tested, in the last 24 hours. The total tests carried out so far are at 133,541, the Chief Administrative Secretary for Health, Dr. Rashid Aman announced today.

From the positive cases, 112 are Kenyans, and 5 are foreigners, while 83 are males and 34 are females. The youngest is 11 years while the oldest is 75.

In Mombasa, the 22 cases are from Mvita, 8, Kisauni, 5, Changamwe, 4, Likoni, 3, while Jomvu and Nyali have one case each while in Kajiado, has 18 cases from Loitokitok, 12, Kajiado Central and Kajiado East two cases each.

The CAS also announced that the Government has discharged 91 patients from various hospitals, bringing the total number of recoveries to 1,550. “We have unfortunately lost two patients to the disease bringing the total fatality rate to 119,” he noted.

He also highlighted that the spread of the virus is concentrated in specific areas such as Westlands, Lavington, Kileleshwa and Hurlingham, where groups of young people are organizing house parties. These activities are being conducted with little regard to social distancing requirement, he said.

“I want to remind Kenyans that avoidance of social gatherings is among the containment measures of coronavirus disease. I want to appeal to our people to take individual responsibility, in observing the measures that have been advocated for failure to which this disease will be difficult to contain,” he said.

The acting Director-General, Dr Patrick Amoth noted that the deaths that occurred today includes a five-year-old from Daadab camp and a 46-year-old female from Thika town and advised the young people that they are not immune from contracting the COVID 19.

“At this time when the premier league football matches are beginning though the stadiums are empty, we are warning our young people who congregate to watch the matches to wear masks and also maintain the social and physical distance,” he stressed.

He also clarified that the Government is using IDs and Passport numbers to trace 140 people who had given the wrong information. Out of the 140 cases, a few of them were from outside Kenya especially in the targeted areas such as Eastleigh,  where they were living illegally.

Meanwhile, the DG said that testing is being done for the State House personnel after every two to three weeks.