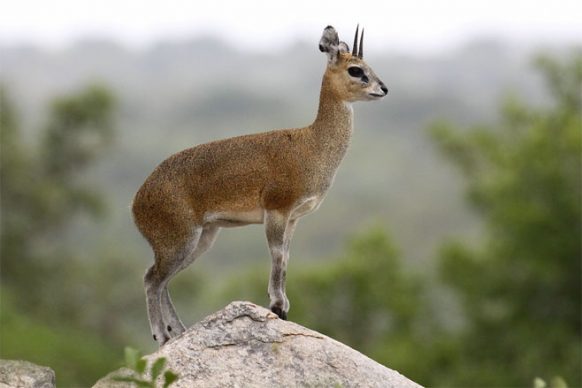 Scientifically referred to as Oreotragus oreotragus, the Klipspringer is small antelopes thriving in the southern and Eastern parts of Africa where they are explored on Africa Safari holidays including Uganda safaris and tours.

Noted to be the only members of Genus Oreotragus, Order Artiodactyla and Family Bovidae, the Klipspringer was first detailed by August Wilhelm a German Zoologist in 1783. It appears as a sturdy small antelope with shoulder height of 43 – 60cm and the weight of 8 – 18kg.  The Klipspringer’s coat appearance ranges from yellowish gray to reddish brown which gives it good camouflage in the rocky habitats where it dwells including the ancient Precambrian rocks of Lake Mburo National Park where it is always viewed on Safaris in Uganda. The horns of the Klipspringer are spiky and short stretching from7.5 – 9cm and only exist in males.

The Klipspringers are primarily nocturnal species meaning that they are very active at night and normally take a rest at middle of the day and late night time. They are noted to be selective browsers and feed on flowers, fruit of herbs and shrubs not forgetting soft green shoots. The Klipspringers rarely feed on grass and do not depend on water.

Klipspringers are monogamous to a greater extent compared to other species of antelopes and feature long term pair bonding. The mates are most of the time 5m close to one another. The male Klipspringer creates territory (19 – 121 acres) in which it stays with the partner and the off spring. The gestation period of a klipspringer lasts about six (6) – seven (7) months after which a single calf is produced. The calf separates from its mother after attaining one year of age. This forms part of the themed interpretation about these species by wildlife guides during game drives on a safari in Uganda.

Klipspringers occupy rocky terrain areas marked by sparse vegetation which gives them an advantage in escaping from their predators. The Predators of Klipspringer include; Leopard, Spotted Hyena and the Jackals while the young ones can even be attacked by Baboons and Eagles.

Regarding conservation, the Klipspringers are listed on the red list of International Union for Conservation of Nature (IUCN) as species of least concern. The species have few threats due to the nature of their habitats which are unfavourable for hunting and hardly accessible.