What to know about Ngamba Island in Uganda – Uganda Safari News 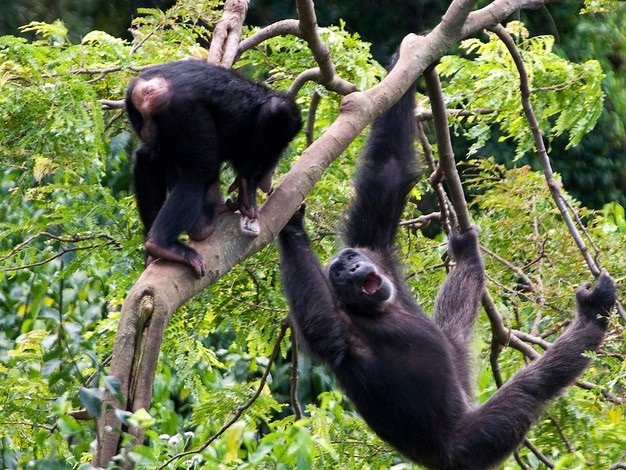 Uganda Safari destination is endowed with numerous tourists attractions distributed in different parts of the country part and most of them haven’t been explored by the tourists. The landlocked country blessed with good people, green natural vegetation, surrounded with water bodies and diverse cultural attractions, is also gifted with different Islands and among these  include Ngamba Island which is group of Koome islands founded in Lake Victoria.
The interesting Uganda safari destination of Ngamba Island is located roughly 23 km south-east direction from Entebbe and it’s strategically located on the mainland that coordinates 32.39’E and 0.06’S. The Island covers an estimated area of 100 acres of land and of this 98 acres are occupied with forest and it’s separated from the human camp by fence which is connected with electricity. The northern section of the Ngamba Island is flat land scape which rises gently to an estimated altitude of around 3800 feet above sea level to the southern part of the Island. The biggest section of the Ngamba Island is covered with forest and some parts of grassland covering only apportion of 10% of the island.
The northern section of Ngamba Island was settled by the local community whose main activity was fishing not until in the year of 1997 when this community was made to vacate some part of the Island. But during their stay they had managed to clear an estimated 2 acres of land which was covered by the natural forests but also current almost one acre of this part of land is now being utilized as main camp site for the staff working in the Ngamba Chimpanzee Sanctuary and also camp point for the researchers whereas the other part of the land positioned between the viewing plat forms and forests is being used as feeding place for the orphan chimpanzees which can be encountered on Uganda safaris.
The impressing bit of the island is that Ngamba Island has Chimpanzee Sanctuary that was started in the month of October, year 1998 to protect and care for the orphaned chimpanzees that are being captured in park by the poachers. This role of capturing the chimpanzees from the poachers is done by the Uganda Wildlife Authority a body responsible for protecting and managing wildlife in Uganda including National Parks that are always visited by travellers on safaris in Uganda.
The Island which is surrounded by the calm waters of Victoria Lake is the perfect place where visitors who are planning to take their safaris to Uganda should visit to have an enjoyable experience of interacting with the magnificent rare species of the 48 orphaned chimpanzees being habituated in this Island.
Uganda safaris/Uganda safari News
Prime Uganda safaris & Tours Ltd