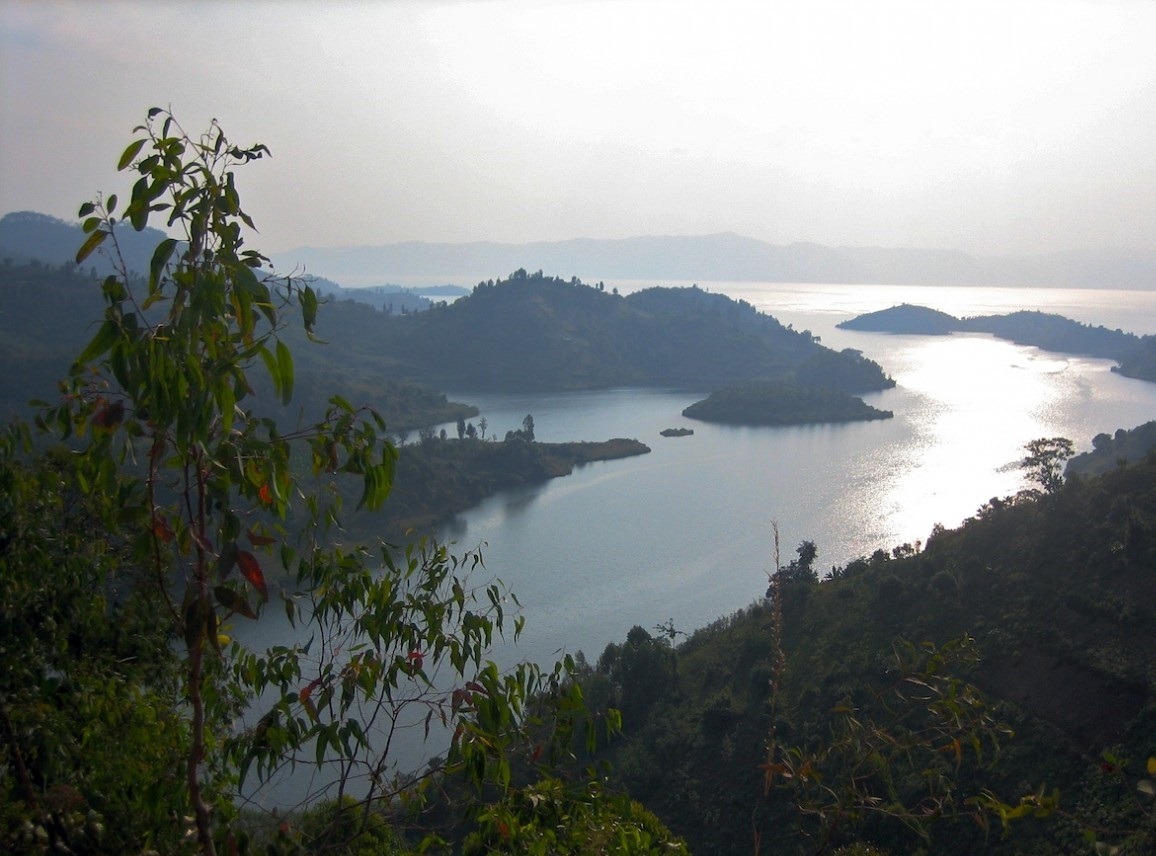 Lake Kivu is one of the Prime destinations that are always visited by travelers on safaris in Rwanda. The lakes is considered as part of the Great Lakes of Africa positioned at the boarder of Rwanda and the Democratic Republic of Congo lying with in the Albertine rift which is the western branch of the Great East African Rift valley.
The Kivu Lake has the outlet of River Ruzizi which flows to the south emptying into Lake Tanganyika. It can be noted that the first European to encounter the lake was a German National Count Adolf von Götzen in the year 1894 and the lake gained a notoriety position as the main dumping place for the genocide victims
Regarding geography, Lake Kivu stretches over a geographical coverage of 2,700 km2 standing at an elevation of 1,460 m above sea level. The 58% of the lake waters are positioned in the Democratic Republic of Congo with the rest in the boundaries of Rwanda. The bed of Lake Kivu sits on the rift valley floor and it is continuously being pulled apart forming volcanic activity and enhancing its depth to its current maximum depth of 1,575feet about 480m which makes it the 18th world’s deepest lake making it an ideal attraction to be included on what to encounter while planning safaris to Rwanda
Lake Kivu features Idwiji Island which stands as the tenth largest Island in the whole world. The lake also features the impressive tiny Island of Tshegera located within the Virunga National Park in the neighboring Congo. There are series of lake shores settlements including the areas of Kabare, Bukavu, Sake, Kalehe and Goma in the Congo Democratic Republic while in Rwanda the settlements are featured at Cyangungu, Kibuye and Gisenyi.
Regarding Chemistry, Lake Kivu is a fresh water lake and like Lake Monoun and Lake Nyos, it experiences limnic eruptions. A lot of biological extinctions have been evidenced on the lake shores by the geologists noted to have occurred about 1000 year ago as a result of events of outgassing. Though the trigger of the lake overturn is not known, the volcanic activity is well suspected. It can be noted that the chemical composition of the gases in the lakes that explode vary for every lake and for Lake Kivu, it is carbon dioxide and methane because of the lakes interaction with the volcano. There is 65 cubic kilometers of methane estimated to be in Lake Kivu and if burnt in a year, it can generate a mean power of around 100 gigawatts over the whole period. Lake Kivu is also noted to contain an estimate of 256 cubic Kilometers of the Carbon dioxide gas. The water temperature in Lake Kivu stands at 24 degrees Celsius and features a ph. level of 8.6. The Methane gas is noted to be derived by microbial reduction of the Volcanic CO2 and it can be noted that the overturn of Lake Kivu is extremely catastrophic far beyond that of Cameroon lakes since there are about 2 million thriving in the lake basin of Kivu.
The Scientists believe that the adequate volcanic interaction in the bottom waters of Lake Kivu containing enormous concentration of gas have the capacity to heat water, push the methane out of the water, trigger a close simultaneous carbon dioxide release and this carbon dioxide would suffocate considerable numbers of people on the Lake Kivu basin as a result of the gas rolling on the surface of the lake. It can be noted that is possible for the lake to create tsunamis in the process of the gas exploding out.
The risk posed by Lake Kivu began to gain much attention and understanding following the analysis of Lake Nyos recent events. Initially, the gas in Lake Kivu was considered as just a natural resource that would be exported and put to use for generation of power. However, with the understanding of the complex causes of the lake overturns, the great danger that it poses to the surrounding communities began to be realized.
The efforts of installing the vent pipes to remove the mentioned gas from the bottom layers of the lake like what was done at Lake Nyos might be too expensive considering the size of Kivu Lake. It can be noted that there are about 500 million carbon dioxide tones which is little under 2% of the quantities released by human fossil fuel burning per annum. This makes the process of releasing the gas to be more costly going beyond the system building and operation.
Regarding the methane extraction, the Kivu lake is noted to contain 55 billion cubic meters about 1.9 trillion cubic feet of the dissolved biogas at 300m depth. The Bralirwa brewery operating at Gisenyi has been extracting small quantities of this gas to run its factory and the government of Rwanda has been engaged in various efforts of bringing a range of developers on board to produce the methane from Lake Kivu including the Kivu watt which is backed by Contour Global a United States Energy Company.

Besides gases, Lake Kivu also features minimal quantities of fish Species with 28 Species in number of which four (4) of these have been introduced. The indigenous fish Species in Lake Kivu include; Lake Rukwa minnow (Raiamas moorii), four species of Barbus (B. apleurogramma, B. altianalis, B. pellegrini and B. kerstenii), two Clarias catfish (C. gariepinus and C. liocephalus), an Amphilius catfish, Nile tilapia (Oreochromis niloticus) and fifteen (15) restricted Haplochromis cichlids. The Fish Species that were introduced include; three (3) cichlids, O. leucostictus and redbreast tilapia (Coptodon rendalli), the long fin tilapia (Oreochromis macrochir), and a clupeid and the Lake Tanganyika sardine (Limnothrissa miodon). The Tanganyika Sardine was introduced by a Belgian Engineer A. Collart to Lake Kivu in the year 1959 and it is the only natural lake in the world with these Species which was initially restricted to Tanganyika Lake.
Regarding tourism, Lake Kivu is by no means an ordinary Rwanda safari destination. It is a haven for a range of water activities that tourists can engage in while on safari in Rwanda. Being a Bilharzia free lake with no Hippos and Crocodiles with favorable surface temperatures of 23 – 27 degrees Celsius, Lake Kivu is an ideal swimming point in Rwanda. No need to worry about the gases as they are trapped at 260m away from the shores.
Lake Kivu also offers a rich ground for popular water sports including the wind surfing, jet-ski, catamaran and Kayaking. It’s impressive Islands are ideal for encountering including Napoleon Island which is a habitat to a thousand bats, Amahoro Island, Paladise Malahide and the cultural tours to the Nkomo and Bunagana Islands. Lake Kivu also offers impressive encounters for sports fishing and boat cruises.