THE LAPPET-FACED VULTURE; BIRDS OF UGANDA 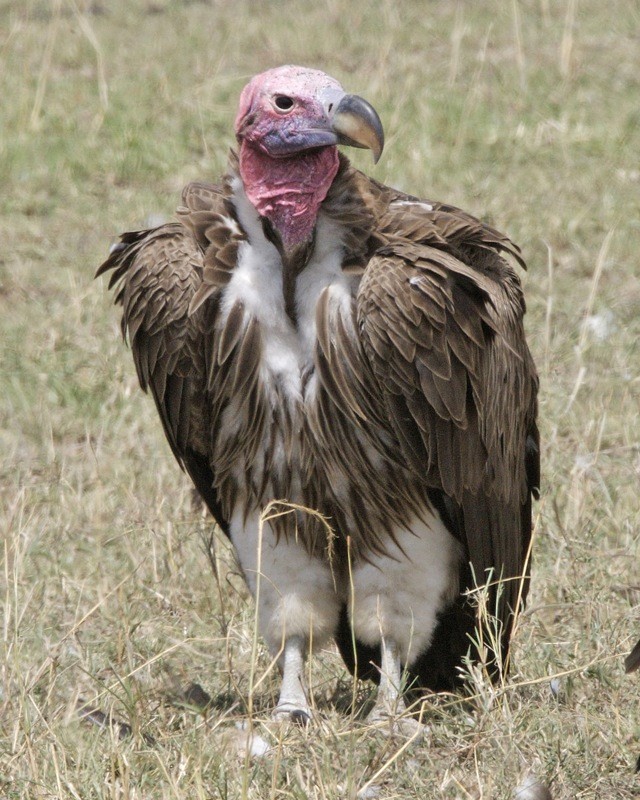 The lappet-faced vulture scientifically known as Torgos tracheliotos stands as an Old world vulture which belongs to Accipitriformes order that includes kites, eagles, hawks and buzzards most of which are explored on birding safaris in Uganda. This is known to be the lone member of the Torgos genus.

This remarkable bird species is noted to be the Africa’s largest vulture dominating other Vultures while feeding and is at times strong enough to chase away the jackal from the kill. The broad-winged bird feature powerful and large beak with the capacity to tear off the hides, the tendons along with any coarse tissue of its scavenged prey something that can be very challenging for smaller scavengers as often viewed on Uganda safaris and tours.

The lappet-faced vulture is easily identified by its prominent size, pink-skinned bare head along with skin folds noted as lappets on the neck sides that form the background for its naming. They thrive in two sub species with the African subspecies identified by feathers that are dark brown to black contrasting sharply with the white thighs along with the white bar that runs across the under wing’s leading edge which is visibly clear in the flight. The other North East African Subspecies are notably brown in colour with partially brown thighs where some members show the white colour under wing and these were initially found in Israel also with their backs marked by pure white feathers.

Regarding feeding, the lappet-faced vulture is a scavenger bird that thrives on carcasses of animals which it spots by encountering other vultures or sighting it themselves. The full crop of the lappet-faced vulture can take up to 1.5kg of meat. They can scavenge on road-kills or other dead animals but can as well attack a live animal especially the weak and the young.

The Lappet-faced vultures are primarily solitary birds and it very hard to find a count of ten (10) nests in one area. The home range of this bird species can be 8 to 15km.  They normally nest in the months of November through to July for the northern groups, May to January to the south of Africa and all year-round for East of Africa including Uganda where they are encountered on Uganda safari holidays.

They thrive majorly in dry savannah, rid plains, thorn bush, Open Mountain slopes and deserts with scattered trees and would avoid tall grass cover. However, they can stretch to would be avoidable areas after spotting a prey while foraging.  The lapped-faced Vulture thrive in countries of Uganda, Senegal, Burkina faso, Mali, Chad, Niger, Ethiopia, Kenya, Mozambique, Zambia, Namibia, Malawi, South Africa, Somalia, Gambia among others while beyond Africa; they thrive in Yemen, Arabia, United Arab Emirates and Oman.

The lappet-faced Vulture is listed as endangered on the International Union for Conservation of Nature (IUCN) red list.