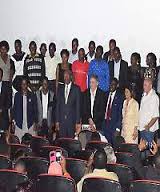 Kisementi, in Century Cinemax Acacia. Le Grand Jour meaning ‘The Big Day’; is a French Movie about Ugandan, Indian, Cuban and Nepalese people who perceive through the World’s challenges to achieve their dreams. Directed by Pascal Plisson, a prominent French Documentary maker and screenwriter; and produced by Ms.Maria Tauzia, Le Grand Jour is a movie that shows how youth could be a masterpiece in developing their countries through sports, environment and wildlife conservation, and other e=means that surround them. Having a Ugandan, Tom Ssekabira aged 19 years, as one of the actors in the movie; Le Grand Jour gives people who would wish to undertake safaris to Uganda a preview of the rich biodiversity and eco system of the ‘Pearl of Africa’ Uganda as part of the scenes were shot in Queen Elizabeth National Park. There are several scenes in the movie which highlight the conservation of Wildlife in Uganda, boxing in Cuba, gymnastics in Nepal and Mathematics in India. No matter what part of the world they are, the characters are shown trying to make it in life by enduring life’s persecutions.
It has a duration of 3 hours, so far screened in countries of; Japan, Spain, USA, Italy, Cuba and lately Uganda. It was produced in French, but also has Subtitles in languages such as English. Le Grand Jour was initially launched at the United Nations Education, Scientific and Cultural Organization’s (UNESCO) headquarters in Paris; early last year (2015) in September with an audience of over 2,000 people. The Launch in Uganda was fully supported by the Minister of Tourism, Wildlife and Antiques; Hon.Dr.Maria Mutagambwa; along the Uganda Tourism Board (UTB) team and other private sectors such as Brussels Airlines, Fairway Hotel and the whole Uganda Embassy staff in France. Besides being prominently known for its rich bio diversity and eco system which makes it primarily the Pearl of Africa; Uganda is currently undergoing popularity as far as international film destinations are concerned. According to the Chief executive direct of the Uganda Tourism Board, Stephen Asiimwe; such initiatives jet in foreign income due to hire of equipment, accommodation and other facilities. Being in French, it is believed that the movie might expose Uganda safaris destinations to French citizens, who are regarded as the fourth largest group of high spending tourists world-wide. Le Grand Jour was shot in partnership with Pathe films and UNESCO.
Last year (2015), an award winning Movie about the life of a Ugandan chess player, Phiona Mutesi, was shot in Uganda. The movie, ‘Queen of Katwe’ had prominent actors such as Lupita Nyongo and David Oyelowo; directed by Mina Nair. Other prominent award winning movies shot in Uganda include The Last King of Scotland, Machine Gun Preacher and others. All the movies shot in the country primarily peep through the Window into Uganda Safari destinations; since they feature shots taken in some cities and National parks in the nation.