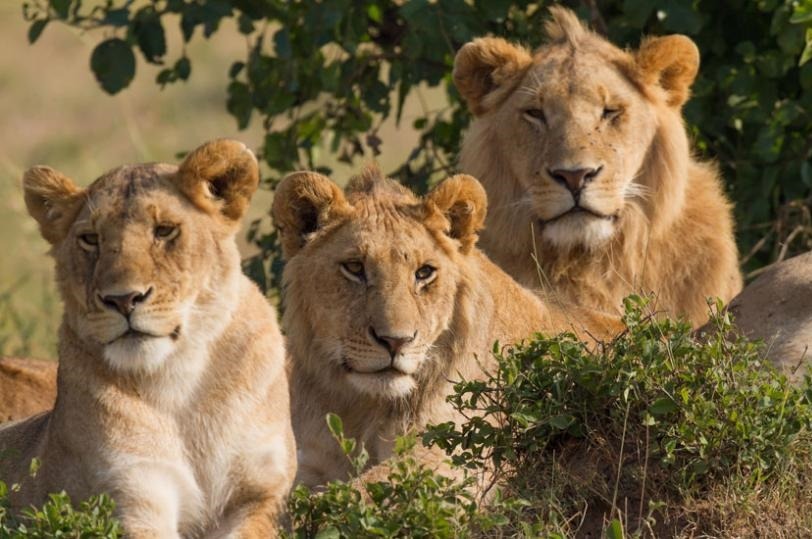 The seven lions that were transported from South Africa to Rwanda at the end of June are anticipated to boost tourism activities in Rwanda’s Safari destination of Akagera national park. The seven lions that consisted of the five (5) females from & Beyond Phinda Private Game Reserve and two (2) males from Tembe Elephant Park in South Africa are now first hiding in the diverse vegetation zones of savannah grass land, acacia, woodland of Akegera national park. After some time, these are anticipated to become used to the environment and thereafter tourists on Rwanda safaris to Akagera national park will have the unique opportunity to enjoy the views of the lions in the wilderness of Akagera. As per now, viewing is not limited to park personnel who had been monitoring the lions in the boma where they are hiding from.
The lions have come from various prides; among the females are a ten (10)-year-old mother and her daughter who is one (1) year old, 5 year old single female not forgetting two sisters which are 3 years old. There are two males which are 3 and 4 years and have no blood contact. The lions consume Impala antelope on 2 – 3 days and then hunt for their own prey giving travelers opportunity to encounter them during the game drive on safari in Rwanda.
All seven(7) lions trans-located to Akagera are fitted with satellite collars in order to allow the park management to track their movements, and see whether they stay co-exist together as a pride or separate up as they get used their new environment of Akagera national Park.
The seven (7) lions are named by those who critically played vital role in supporting the trans-location process, including Bralirwa brand and Turbo King, which was given chance to name the two male lions. Turbo King catered the lion’s charter flight from South Africa to the land of thousand hills Rwanda and the other female lions are named by other vital stake holders who also played great role in the trans-location of the lions.
Strategically located in the eastern part of Rwanda along the border with Tanzania, Akagera national park is Rwanda‘s only wildlife safari destination where visitors on Rwanda wildlife safaris can enjoy the views of different wildlife species such as Zebras, buffaloes, African elephants ,waterbucks, among others. Now together will the views of the initiated lions, the park is safe haven in the land of thousand hills to have life time wildlife viewing experience