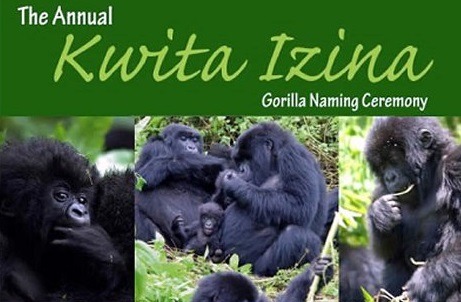 Rwanda standing in the heart of Africa is a famous destination whose popularity has been championed both by the bad and the good. Considering the series of unstable events that characterized its politics right from 1959 culminating into the 1994 Rwandan genocide, it is surprising and energizing to see this country again ranking in the fast growing economies on the African continent.
Rwanda safaris have rejuvenated and apparently tourism stands among the main foreign exchange earners for Rwanda. Organizing one of her annual events called Kwita Izina in special commemoration of her mountain gorillas that are behind the flourishing of gorilla safaris in Rwanda, the Rwanda Development Board has resolved to reward a range of local people that have played a significant role in the conservation of mountain gorillas along with other wild game.
Scheduled to occur on the 5th September of this year at Kinigi in the district of Musaze where a count of twenty four (24) baby gorillas will assume their names, the Kwita Izina ceremony is a big event that is beyond the ordinary. This will be its eleventh edition and the first of it to go regional recognized by the partner states of northern corridor project making it a Rwanda safari product in itself.
Yamina Karitanyi who heads the Tourism at Rwanda Development Board emphasizes the move to acknowledge the efforts of the local people towards conservation during this year’s ceremony. The officer agrees that the government has worked with the guides, rangers, the local communities and conservation groups to undertake proactive measures in restoring the habitats not only for gorillas but also for other wild game which remain pivotal in ensuring the sustainability of safaris to Rwanda.
Running under the theme which reads conserving now and for the future, the Kwita Izina Ceremony unleashes the broader conservation picture that Rwanda has in mind for its bestowed natural beauty and its sustainable use.