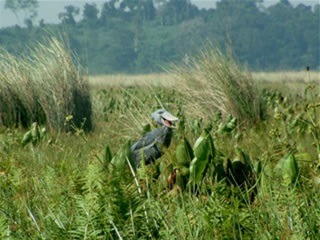 Mabamba swamp is an expanse marsh that stretches through a long narrow bay that is fringed with papyrus as you draw closer to Lake Victoria in Mpigi district which is normally encountered by travellers on Uganda safaris
The Cyprus and Miscanthus species dominate though there is a narrow channel of open water and a patch of Nymphea caerulea. The swamp also contains areas of Cladium mariscus and drifting papyrus islands at times. The wetland form part of Waiga bay south west of the bay of Nakiwogo in the west of Entebbe International Airport which is the main landing point for travellers on safaris in Uganda.
Mabamba wetland/swamp is listed among the Important Bird Area is among the best marshy areas along the Lake Victoria northern shores and interestingly to note is that Mabamba swamp is the closest place in Kampala where shoe bill stork which is the most sought after bird by birders on Uganda safari tours can be encountered.
The climate of Mabamba wetland is the same as other areas along the Lake Victoria northern shores with 1200 – 15,00mm of rain and average minimum temperatures of 17 degrees Celsius and maximum average temperatures of 26 degrees Celsius. Mabamba wetland is also a habitat to other 300 bird species including enormous congregations of migrant species like Blue Swallow, Gull-billed Tern, White-winged Tern, and Papyrus restricted species like Papyrus Gonolek, and Papyrus Yellow Warbler. Other species of birds include; good counts of goliath heron, Lesser Jacana, Squacco Heron, Spur-winged Goose and good counts of waders. The combination of these makes it to be included on the lists of travellers planning safaris to Uganda.
Uganda safaris/Uganda safari News
Prime Uganda safaris & Tours Ltd safari News