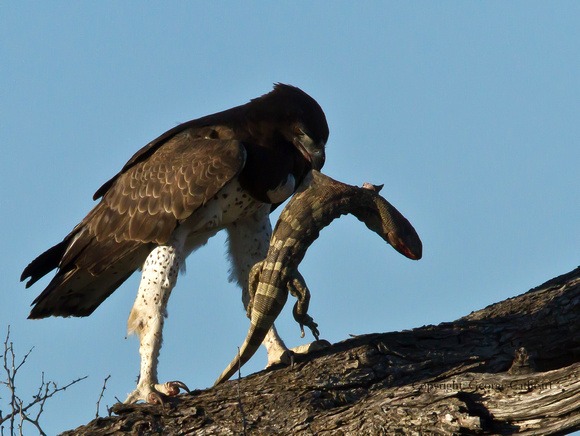 Also referred to as Polemaetus bellicosus, the Martial Eagle is one of the prominent bird species that thrive in semi-open habitats in the south of Sahara including Uganda where is explored on birding safaris in Uganda.

The plumage of an adult Martial Eagle is dark grey-brown on the head, upper parts and the upper chest but with light colouring to the feathers. It features white colour with blackish-brown spotting on the under parts of its body. The female Martial Eagle is noted to be larger and has more spots than the male as viewed on Uganda birding safaris and tours. The young attains the complete plumage in their seventh year.

The martial Eagle likes perching in upright position and its long wings stretch to cover the tail completely. It features a strong bill stretching to 5.5cm in length while the feathery legs give way to its powerful feet.  The martial eagles feature a remarkable keen eye sight that enables them to spot their prey at an extended distance.

Regarding distribution, the Martial Eagle thrives majorly in the sub-Saharan Africa in areas where the environment is favourable and food is in plenty. It is not a common bird species but greater concentrations exist in Southern Africa including the Africa Safari tour destinations of South Africa and Zimbabwe.  Its habitat is open woodland and its edges, thornbuh and wooden savannah. Though it requires trees for nesting and obstruction during hunting, the martial eagle does not thrive in dense tropical forests such as the Equatorial jungle of Congo.

The Martial Eagle is an apex predator and consumes birds mostly game birds and Egyptian geese, reptiles such as snakes and monitor lizards and mammals like hares, mongooses, hyrax, young dik-diks among others. It hunts high in flight and stoops sharply to catch its prey by surprise which is one of the exciting moments if explored by a birder while on safari in Uganda. However, they can still do hunting on high perch or vegetation conceal.

Martial Eagles put up their nests in large trees about 6 – 20m from the ground but cases of 5 – 70m have also been reported.  The nest is majorly made up of sticks. The martial eagles are noted to feature low breeding rate because they lay one egg after two (2) years. The incubation of the egg takes 45 – 53 days and the chick fledging takes place between 96 to 104days.