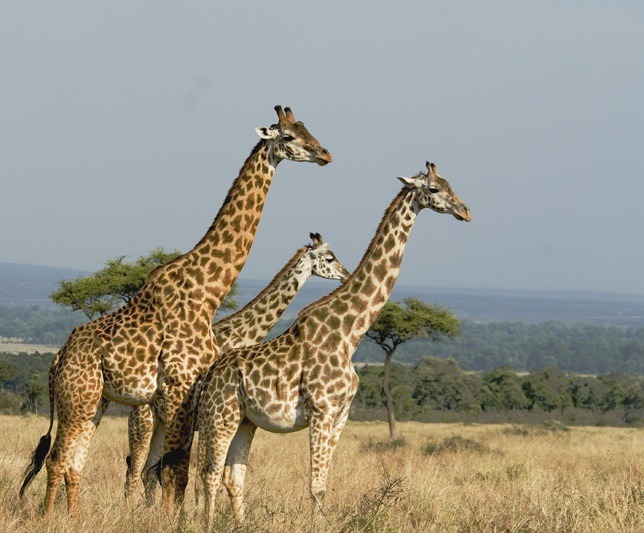 Scientifically referred to as Giraffa tippelskirchi, the Masai Giraffe is one of the East African Safari tour wild game products thriving in the range of East African Countries especially Kenya and Tanzania.

The Masai Giraffe body is marked with jagged spots and is the largest of all the Giraffe Species. Also noted to be the tallest of all the Giraffe Species and thus becoming the world’s tallest mammal with a fully grown up height of 19 feet, the Masai Giraffe cannot escape the sight of the world travelers on Africa safaris in Rwanda, Kenya and Tanzania.

The females are normally shorter compared to the males with a fully grown up standing at 16 feet in height. The weight varies and the males can stretch from 2,000 to 3,000 pounds while the female can stretch from 1,300 to 2,000 pounds. The male Masai Giraffe feature dark spots compared to females.  In fact, the dominant male in the herd has darkest spots which surprisingly wouldn’t be that way when he first takes up the role. These Species do not posses spots below the knees which feature creamy or white color.

The Masai Giraffe are noted to be exceedingly powerful considering the design of the hooves and the legs which explains why the predators would always wish to avoid attacking them because a single Kick can kill a predator. The Masai Giraffe are noted to be the fast runners featuring a speed of up to 35miles per hour. The long necks interestingly feature valves that prevent blood from running to the head area when the animal is bending to drink water making it one of the unique wildlife species in the world.

Regarding the behavior, the Masai Giraffe thrive in smaller herds and enjoy great social coherence with only aggression among males while pushing for dominancy and mating rights. There is no considerable connection between males and females until the time of mating and individuals roam in a home range of about fifty (50) miles.

The Masai Giraffes are complete herbivores and their diet includes vegetation items like seasonal fruits, Acacia leaves, twigs and flowers. They can spend a lot of time feeding about 16 – 20 hours. The thick lips and tongue enable them to forage around the thorns. The males feed from right top branches while the females feed from lower branches and since they prefer to feed in areas where their food would have more water, the Maasai Giraffes are capable of going some days without water.

Regarding reproduction, the female Masai Giraffe can mate at the age of four (4) years while Males push up to seven (7) years due to the struggle for dominancy. The gestation period is fifteen (15) months and usually it is one calf though twins rarely occur. Like many of the herbivores, the Maasai Giraffe also has predators and these include mostly Lions and Hyenas. As regards conservation, the International Union Conservation of Nature (IUCN) lists them as Least Concern.

The combination of the above listed make the Maasai Giraffe interesting animals, very exciting to explore on safaris in Tanzania, Kenya and Rwanda.