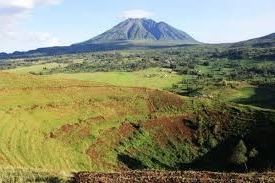 Mgahinga Gorilla National Park placed at the extreme end of the south west of Uganda in the district of Kisoro, is one of the famous Uganda safari tour destinations that have made their way to the must visit micro destinations in Uganda.
Forming the Ugandan section of the Virunga massif incorporating the ranges of Muhabura, Sabyinyo and Gahinga, Mgahinga Gorilla National Park is the second refigium of the world’s critically endangered mountain gorillas that only thrive in Bwindi and Virunga massif in the whole world making the region a hot spot for gorilla trekking safaris and tours in Uganda and Rwanda.
Stretching over 38km2 of raised landscape, Mgahinga continue to form the border with the countries of Rwanda and Democratic Republic of Congo adjoining the parks of Virunga and Volcanoes which are also haven s for gorilla trekking encounters in their respective countries.
The fertile volcanic soils that mark the slopes of the towering volcanoes have facilitated the growth of luxurious vegetation that is interesting to encounter while on safari tours in Uganda. The unique features like the Sabyinyo gorge, the swamp crater on Mount Sabyinyo and its rugged peaks among others make Mgahinga an interesting destination to encounter.
Being the ancient home of the Batwa forest people which are considered to be among the last groups of the short surviving people, it has got rich heritage sites including the Garama caves which acted as their center while still in the forest before their eviction. The golden monkey populations that thrive in the bamboo zone are among the unique species that Uganda has got to offer to the travelling world. The golden monkeys only thrive in the Virunga Massif and Giswati forest Reserve in Rwanda in the whole world thus a remarkable product that can be encountered by travellers undertaking a safari tour in Uganda and Rwanda.
Uganda safaris/Uganda safari News
Prime Uganda safaris & Tours Ltd safari News