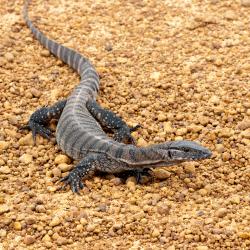 Monitor Lizard forms the common name for the range of large species of lizards that comprise the Genus Varanus which are native to the continent of Africa, Oceania and Asia.

The Monitor Lizards are marked with long necks, powerful claws and tails along with well-built limbs as always viewed on Uganda Safaris and Tours.

The length of the adult existing species stretch from 20cm in some species up to 3m like the Komodo dragon but the extinct species like the megalania would even reach 7m. A range of the monitor lizards are terrestrial though others that are arboreal and semi-aquatic have also been recorded.  The Monitor lizards are majorly carnivores as explored on wildlife safaris in Uganda consuming smaller reptiles, birds and fish along with small mammals but can as well consume some vegetation and fruit depending on their location.

Regarding distribution, the Monitor Lizards are spread in various parts of Africa including Uganda where they are encountered by travellers on Uganda safari tours, parts of India, China, Australia and Florida.

They feature extensive territories and undertake active chase hunting strategy.  The Monitor lizards are oviparous producing 7 – 37 eggs which are covered with soil or a tree stump hollow.

The monitor lizards are listed as threatened on the red list of the International Union for Conservation of Nature (IUCN).