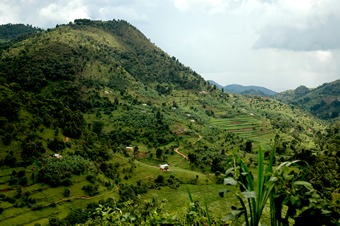 Grab a pen and a piece of paper and write down the following details. “In the heart of the African continent, 440 kilometers west of Kampala City, along the equator and in the districts of Kabarole, Kasese and Bundibugyo rests Africa’s third largest mountain called Rwenzori”. Now that you know the place feel free to put down that pen. Rwenzori is actually the highest block mountain in the whole of Africa. The Margherita peak (5,109m Above Sea Level) of the Rwenzoris is the highest point you can ever be at during your Uganda safari.
The Rwenzoris are a series of six independent mountain ranges that are divided by deep green valleys which are diversely filled with fauna and flora species of all sizes and colors. The upper heights are protected by one of Africa’s prettiest Mountainous National Parks and are a UNESCO World Heritage Site principally because of the verdant botany therein.
Even before Safaris and tours to Uganda’s western parts began, the world knew about the Rwenzoris. The first time the world heard about the Rwenzoris was when an Alexandrian geographical researcher and photographer called Ptolemy in CE 150 wrote about a mysterious mountain in the heart of the African continent which he referred to as the Mountains of the Moon. Many years later (in 1889) a European explorer called Henry Morton Stanley came across a mountain which fit Ptolemy’s description and because of its magnificence, he could not hold back but proclaim that these were the Cloud Mountains in concurrence with Ptolemy.
This legendary place has over the years evolved into one of the most amazing places in the world to tour while on a vacation, and over 150,000 mountaineers have been able to climb through the Rwenzoris with just a few tens reaching the Margherita peak. Mountain climbing in the Rwenzoris remains a first-rate activity to add to your Safari itinerary in Uganda.
For anyone to legally participate in hiking through the Rwenzoris, they have to contact the Rwenzori Mountaineering Services (RMS) or the Rwenzori Trekking Services (RTS). This may be done directly through their offices but it is even made simpler and quicker by one of the tour operators. Tourists will have to pack a strong pair of shoes, clothes for the different weathers in the area (hot and cold), and a good insect repellant. It is also advisable that aspiring hikers work up a good level of fitness and also make consultations with their doctors before deciding on taking this tedious hike.
The activity is currently conducted along two trails; the Central Circuit Trail which can last up to seven (7) days to ascend and descend; and the Kilembe trail which lasts between nine (9) and ten (10) days. The Kilembe Trail climaxes in summiting the Margherita Peak while the Central Circuit Trail ends at the Elena Hut at an altitude of 4563m with views of the snowcapped Margherita Peak. The journey up the mountains is skilfully planned, with huts at differenced levels where hikers can stop and set up lodging for the night, and then continue with the trek the following morning.
People who have engaged in Uganda mountain climbing Safaris in the Rwenzoris have always spoken of an unforgettable experience and the few who have managed to reach the topmost place have always been short of words, in awe of the incredible vistas from the highest place in Uganda. The oldest person to ever reach Margherita was a Canadian lady called Ms. Beryl Parker who at the age of 78 in November 2010 achieved a world record. Like Ms. Parker, many more people desire to reach a lifetime achievement; something to tell their grandkids about. Summiting one of Rwenzori’s peaks is indeed one of those memorable experiences and is open to all the fit ambitious mountaineers. “Welcome to the Mountains of the Moon”