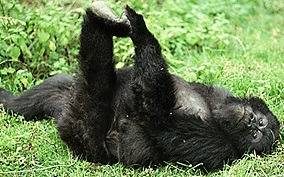 Positioned in the Central and East of Africa, Rwanda has expressed herself above other odds as a great gorilla trekking safari destination with counts of mountain gorillas. In its northern highlands that adjoin the grater Virunga Massif which is an attraction of its own that prompts travellers to undertake safaris to Rwanda, there lies the famous Volcanoes National Park where the gorilla tours are conducted.
The Volcanoes National Park is 116km about 3 hours’ drive from the Rwanda’s city of Kigali and is closer to other Rwanda safari destinations like Lake Kivu (Gisenyi) 10km about 2 hours transfer. The National Park offers a range of other tourist activities besides gorilla tracking including golden monkey tracking, Dian fossey hike and mountain climbing.
The mountain gorilla trekking safaris and tours in Rwanda can be conducted all the year round regardless of the season though dry seasons are preferred by good counts of travellers that the wet. However, this does not affect the Rwanda gorilla safaris as depicted in her laxity to offer discounted gorilla permits like how her neighbors like Uganda do for gorilla trekking permits in low season.
The Gorilla trekking in Rwanda goes beyond mere luxury for travellers to spur and stimulate local economic growth and development. The local people have been absorbed in the tourism and hospitality industry of Rwanda which is greatly centered on gorillas. The revenues generated support the national budgetary plans and expansion of Rwanda’s infrastructure.
The general appreciation of gorilla tourism has improved the efforts for gorilla conservation and harnessed the plight of these critically endangered apes. Rwanda apparently has 10 habituated gorilla families that are dedicated to gorilla trekking safaris. The beginning time for the gorilla trek is 8am and the activity tend to take 2 – 8 hours traversing the impressive volcanic highlands that leaves every Rwanda gorilla safari tour undertaker in a state of amazement.
Rwanda safaris/Rwanda safari News
Prime Uganda safaris & Tours Ltd