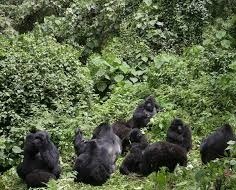 Mgahinga Gorilla National Park is noted to be among the new parks that were formed in the early 1990s and for it; the main motive was to protect the mountain gorillas which are always encountered on gorilla trekking safaris in Uganda.
Positioned at the extreme south western tip of Uganda, Mgahinga protects the Ugandan side of the three Virunga Volcanoes that adjoin the eight Virunga mountain chain where 480 mountain gorillas are known to be thriving presenting remarkable gorilla safari in Uganda and Rwanda.
Mountain Gorillas dwell in the forested landscapes of Muhabura, Gahinga and Sabyinyo and one group Nyakagyezi has been habituated and it is the only one gorilla family that can encountered while trekking gorillas in Mgahinga Gorilla National Park.
The gorilla trekking in Mgahinga requires one to secure permits on ground from Uganda Wildlife Authority branch in Kisoro as they are not booked at the headquarters in Kampala. The start point for the trek is either Ntebeko Visitor Center or the Muhabura side depending on location of the gorilla group by the time you undertake a gorilla safari in Uganda.
The gorilla permit for Mgahinga is the same as that of Bwindi and is given at $600 for the nonresident foreigner and the duration for gorilla trekking also ranges from 2 – 8 hours commencing in the morning at 8am local time.
Trekking Mountain gorillas in Mgahinga National Park is supplemented by tracking golden monkeys which tend to dwell in the Bamboo zone on the slopes of the Volcanoes, the Volcano Climbing where you can summit any of the three Volcanoes and the Batwa heritage trail to explore the Batwa traditions. This combines primate tracking, adventure and culture to generate ultimate Africa Safari memories.
Uganda gorilla safaris/Uganda gorilla safari News
Prime Uganda safaris & Tours Ltd