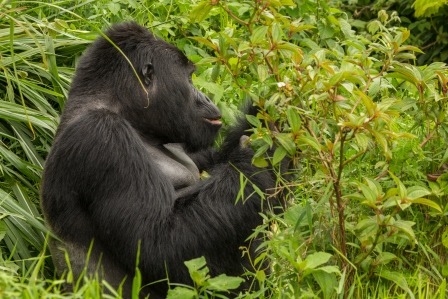 A Gorilla Trekking in Uganda is done in two national parks of Bwindi Impenetrable Forest Park and Mgahinga Gorilla national park. Mountain gorilla safaris are the highlight of all safari tours to Uganda and certainly mountain gorillas are the major reason as to why very many visitors under take safaris to Uganda. On the other hand, Uganda is considered as a very secure and more so safe, hospitable country in the whole world where one can see these worlds endangered Mountain Gorillas in serene surroundings.
Almost half of the mountain gorilla population is protected in Uganda. According to the November 2012 census results released by the Uganda’s Minister of Tourism Wildlife and Antiquities, the number of mountain gorillas is increasing. The results showed that there is a minimum of 400 Mountain gorillas from the 302 of 2006 in Bwindi Impenetrable National Park alone and about over 80 in Mgahinga Gorilla National Park making total number of mountain gorillas to be over 480 in comparison to a world total of 880 which are shared by the three (3) African countries i.e. Uganda, Rwanda and Democratic Republic of Congo.
Currently, there is a total of 36 gorilla families or groups in Bwindi Impenetrable National Park, however, only eleven (11) of these are habituated and can be visited by travelers on Gorilla trekking safaris. The other migratory gorilla group lives in Mgahinga Gorilla Park. This gorilla group in Mgahinga is considered to be very nomadic always roaming between Uganda and the DRC and very unpredictable. However, good news is that the group is now settling in Uganda and ground news shows that since last year it has not crossed borders and hence this too can be trekked by visitors on Uganda gorilla safari tour to Mgahinga Gorilla National park. Gorilla habituation is a process that usually takes 2 years. During this time Mountain gorillas get used presence of human beings .This is continuously done in the wilderness to make the ape species used to human trekkers. In regard to UWA conservation rules, only eight (8) adult visitors on gorilla safaris to Uganda can be allowed to track one or each of the habituated gorilla family or group each day.
I therefore hearten all world travelers to come and be included in the list of few world travelers who have had chance to encounter the world endangered apes in the pearl of Africa –Uganda.
Uganda Safaris/Uganda Safari News
Prime Uganda Safaris &Tours Ltd