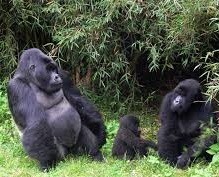 Mountain gorillas are the world’s most endangered ape species and these are only found in small portions of protected afro Montane forests in Volcanoes national park situated in northwest Rwanda. The mountain gorillas are some of the wild life species attracting many Gorilla safari tours to Rwanda. Despite of the fact that Rwanda is a home to many wonderful birds, primates species as well as water bodies, unique cultures, insects, plants, and mountain gorillas have larger account as far as attracting safaris to Rwanda is concern.
Hidden high among the forested, hilly areas of volcanoes national park in Rwanda, the mountain gorilla was not popular to science until 1902, when two mountain gorillas were first confronted by a German explorer who was on his hiking safari to Rwanda’s Karimbi and Visoke Mountain housed in Volcanoes national Park. This set up the beginning point for many researchers and tourists to undertake gorilla safaris to Rwanda in order to carry out further research about the apes. The outbreak of news about the existence of mountain gorilla in Volcanoes national park attracted researches like Dian Fossey to undertake safaris to Rwanda. Not so long after the arrival of the American zoologist Dian Fossey, information about gorillas in Rwanda started circulating and this attracted many Gorilla safaris to Rwanda. However, mountain gorilla conservation activities were put on hold when the conservationist Dian Fossey was murdered by unknown people who stormed her in her base in Karisoke research center.
Currently around 440 mountain gorillas representing half of remaining 840 mountain gorillas live in the Virunga Mountains of central Africa –distributed in three national parks of Volcanoes in Rwanda, Virunga in Congo and Mgahinga in Uganda.
Mountain gorillas in Volcanoes national park can climb trees, but most of times they are found by tourists on Rwanda gorilla safari tours on the ground moving in social communities of 25- 30 individuals. These groups are organized according to engrossing social structures. Gorilla Troops are led by one dominant male gorilla called a silverback because of the swath of silver hair that adorns his otherwise dark fur. Gorilla groups also include some other young males, females as well as their offspring. The silver back which is the leader of the group organizes group activities like feeding as well as nesting in leaves among others
While planning your Rwanda gorilla trekking safari tour, one should not miss out on the impressing chance to tour Rwanda’s Volcanoes National Park covering an estimated area of 125Sqaure Kilometers of mountain forest and home to the six Virunga Volcanoes and the world famous mountain gorillas. The lush ever green forested slopes of the Virunga Mountains form an appropriately interesting natural setting for what is mainly considered to be the most poignant and memorable wildlife safari in Rwanda.
The most interesting climb to the mountain gorilla’s natural home characterized with shady bamboo forest provides tourists on Gorilla tours to Rwanda’s Volcanoes national park with fantastic views in all directions, before the trekkers are immersed in the mysterious intimacy of the rainforest, alive with the free entrainment from colorful birds and the chattering of unique golden monkeys all housed in Volcanoes National park. There is nothing one can organize for the wonderful life changing impact caused by an encounter with the mountain gorillas.
Rwanda Safaris/Rwanda Safari News
Prime Uganda Safaris and Tours Ltd