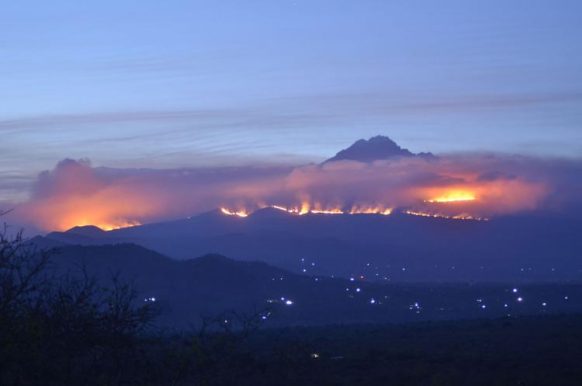 On Sunday 11th October on Mount Kilimanjaro; Africa’s highest mountain caught fire and the flames could be seen from miles away. A storm of hard winds on Sunday spread fire on the mountain and since then, a number of people have been battling it out. The cause of the fire has yet to be established however, there are no injuries or deaths have been reported as well as property damage. This wildfire started at the Whona area; a rest centre for Kilimanjaro mountain climbers using Mandara and Horombo, two of several routes up the mountain.

Tanzania National Parks (TANAPA), one of the Tanzania authorities have undertaken all precautions necessary to ensure the safety of Tanzania safari visitors and their equipment. There are over 500 volunteers including students that have offered to put out a fire on Mount Kilimanjaro. They were working with local authorities to help deliver food and water to the firefighters.

Besides affecting the tourist Tanzania Mountain hiking activity, the wildfire affected the mountain’s ecosystem including wildlife and its vegetation.

Tanzania Government Asks for Helocopiters to Help Battle the Fire Out… 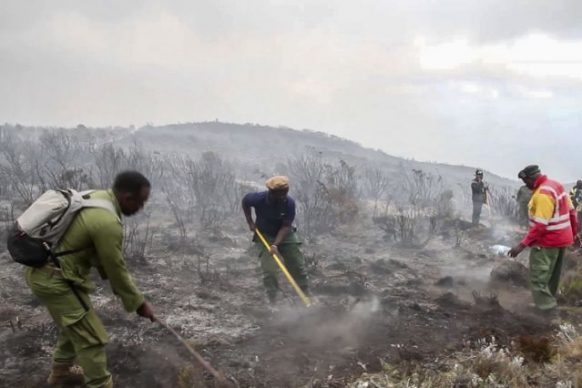 While updating the press, Minister for Natural Resources and Tourism Hamisi Kigwangalla requested for Helicopters and planes hoping that it will help put out the fire raging on Mt. Kilimanjaro. Tanzania’s government hopes that they will help the more than 500 volunteers currently battling the flames on the slopes of Mountain Kilimanjaro National Park.

This is because the fire has spread making it more difficult to control the blaze. “The challenge is the strong wind, the dry grassland and bush,” he said. The fire has burned over 28 square kilometres (11 square miles) of the mountain’s vegetation and is very active in an area known as Kifunika Hill. The firefighters and volunteers have made progress in controlling the blaze, but then strong winds reignited the fires Wednesday, causing huge flames that could be seen as far as 30 kilometres (18 miles) away in Moshi town, in northern Tanzania. 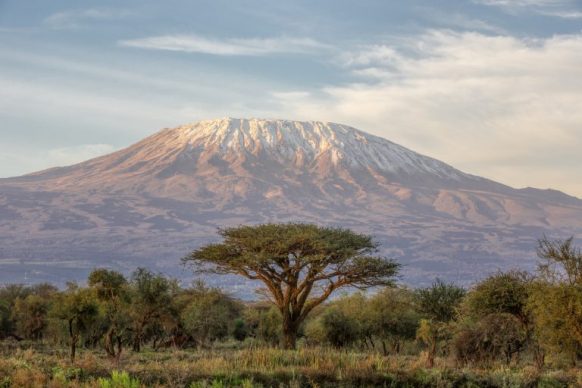 Kilimanjaro mountain is the highest free-standing mountain in the world and within the East African region in the country of Tanzania; (East Africa’s largest country, 947, 303km2). This mountain lies along with coordinates 03004’33’’ S and 37021’12’’E south of the equator.

Being a national treasure, the mountain Kilimanjaro is in a protected area within Kilimanjaro National park. It has three (3) distinct volcanic cones which are Kibo, Mawenzi and Shira. These are hiked by tourists interested in the mountaineering safaris in Tanzania. Kibo is the highest peak standing at 5,895m with Uhuru peak as the highest summit on Kibo’s crater rim, Mawenzi is 5,149m (16,893ft) and Shira is 4,005m (13,140ft) with a broad plateau at 3,800m (12,500ft). Mawenzi and Shira peaks are extinct whereas Kibo is dormant and could probably erupt again, it’s the largest cone more than 15m (24km) wide. Mawenzi and Kibo are separated at 4,400m (14,400ft) by a saddle plateau.

With a lot of preciousness, the mountain is in a protected area within Kilimanjaro National Park that covering about 1,688 km² and a popular Tanzania safari destination. Mountain biking isn’t in most cases a single days’ activity especially taking about 5 to 9 days depending on your hiking ability. Hiking isn’t just for a trip but has much more benefits for those who choose to undertake it since the body relaxes and reduces stress. Hiking isn’t an easy safari activity and therefore requires planning just like any other trip.

Whether for a first-timer or an experienced traveller, mountain hiking or climbing can be a strenuous activity and when it comes to Mount Kilimanjaro you need to know these useful mountain hiking tips.

What to Pack for your Mount Kilimanjaro Climbing/Hiking…

Consider waterproof hiking Shoes: Your hiking with your legs therefore they should be a priority. The nature of shoes also determines the distance that you will comfortably cover and the health of your feet after the hike. Let the only pain that you will experience be the unavoidable muscle pain and not pain caused by inappropriate shoes.

Carry Food Substance: Hiking requires energy but many hikers tend to carry snacks rather than take food. Fortunately, on a hike to Mount Kilimanjaro, you can go along with porters who can provide food by cooking at the camping points. If you don’t eat well during a hike you may return home to fall sick and regret your choice of safari.

Carry Enough Drinking Water: Water covers a larger percentage in the human body fluids which makes it a substance that cannot be ignored. Lack of water may result in dehydration which is accompanied by side effects such as drying of lips and stomach disorders. Carry enough water to keep you hydrated all through your hiking.

Don’t Forget Warm Waterproof Clothing: Warm clothing may sound ridiculous for people hiking for the first time. You need something to warm you through the night while you are resting and waterproof in case it rains or during the obvious morning dew. If you want to avoid arthritis, chest problems, common cold and any diseases resulting from exposure to coldness, warm waterproof clothing should never be neglected.

Best time to go for your Mount Kilimanjaro Climbing/Hiking…

The best time of the year for hiking Mount Kilimanjaro is during the dry months of January/-February or August-September when the mountain is not so much slippery. The park, however, is open to hiking tours in Tanzania all year round.