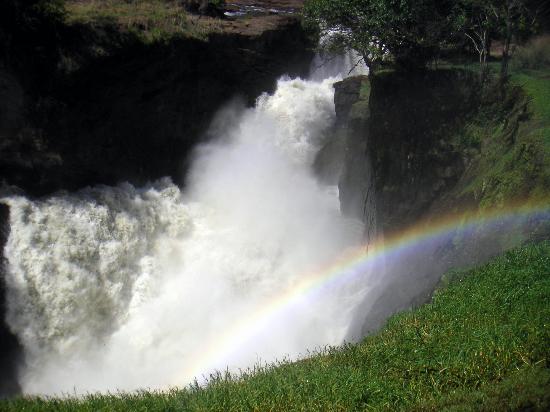 The Murchison Falls is by all means beyond the ordinary. Standing as the world’s powerful water fall because of the enormous pressure that the Nile River waters are subjected to while trying to forge the way through a 6m narrow gap at the base of the rocks that form the fall as encountered by travelers on Uganda safaris, Murchison Fall is worth discussion.
The falls also noted to have adopted Kabalega Falls name during the days of Idi Amin but later returned to its former naming following his ousting, is located in the middle of the largest protected area in Uganda – the Uganda safari destination of Murchison Falls National Park forming the greatest natural feature to ever happen on the Nile River during its course to Mediterranean Sea.
It is noted that the world’s longest Nile River crafts its way in such narrow path presented to it by the unmerciful impermeable rocks that have blocked its path for centuries and centuries past falling to over 43m below in the infamous Devil’s Cauldron creating a wide plume of spray with the a thunderous roar marked by a trade mark rainbow that combine to present one of the magical scenic views in Uganda.
The Sir Samuel Baker and his wife were the first gifted Europeans to encounter the Murchison Falls on their quest for the source of the Nile from the north. He named after his boss – Sir Roderick Murchison who was then the President of the England’s Royal Geographical Society on 14th March 1964.
The site has attracted a lot of historical travelers including Hemmingway though his plane crashed down the river in the year 1954 during the adventure. Visiting the Murchison Falls opens you to greater ecosystem of Murchison Falls National Park with its impressive open savannah to the north marked by patches of borassus palm, the woodland to the south, the flowing Nile River and the forest of Rabongo all supporting counts of savannah game like elephants, lions, Buffaloes, Leopards, Jackson’s Hartebeest, Rothschild Giraffes, patas monkey, Oribis, Jackson Hartebeest, Kobs among others; aquatics like Nile Crocodiles and Hippos; the forest dwellers like Black and white colobus monkey in Rabongo not forgetting the chimpanzees in the adjacent Kaniyo Pabidi and White Rhinos in Ziwa Sanctuary.