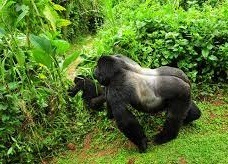 In the region of Buhoma which exists to the north of the Uganda gorilla safari destination of Bwindi Impenetrable National Park lived two gorilla brothers namely the Rwansigazi and Mwirima the biological sons of Mugurusi in the gorilla family of Habinyanja.
The Habinyanja gorilla family had got the name from the Nyanja which is a local word belonging to the Rukiga meaning a place of water. This is because Habinyanja gorilla family was first encountered near a swamp in the impenetrable forest of Bwindi. From the time of its habituation, the Habinyanja gorilla group featured a considerable population that counted up to thirty (30) members and the aging Mugurusi was the dominant Silverback as it would be encountered on gorilla trekking safaris in Uganda.
Mugurusi had given birth to among others the two (2) enthusiastic male gorillas namely Mwirima and the Rwansigazi. Following the death of Mugurusi as a result of age, the successor had to emerge. Though ideally Rwansigazi was meant to be the successor, Mwirima had also attained maturity and would vie for the leadership of the gorilla family. These two males kept in such situation until they could no longer tolerate each other.
The factor that caused their separation was not struggle for dominancy as one might think. It was the behavioral difference. The Rwansigazi gorilla family was a considerable adventurous individual who preferred to range in far distance while the brother Mwirima liked to dwell in a small range thus less adventurous as travelers on gorilla safaris in Uganda would also view.
As a result of this difference in behavior, the two (2) brothers who had attained the real Silverback status resolved to part ways to accommodate the interests of one another. This decision took effect in the year 2002 when the adventurous gorillas teamed up with Rwansigazi and the less adventurous remained with Mwirima. Surprisingly, there was no notable fight that occurred when these two brothers were disintegrating.
The gorilla family that kept with Rwansigazi remained with the name Habinyanja while the Mwirima group was named Rushegura after the local flora species called Ebishegura. However, despite the separation, these two brothers maintained a touch of brotherhood and there was no fight registered to have occurred between these two gorilla families despite occasionally meeting one another.
As the time has passed, Mwirima and his brother Rwansigazi aged and could no longer maintain their position in their families a reason these two groups now feature new silverbacks. The impressive Rushegura gorilla family with its count of 19 members is dominated by Kabukojo who took over the throne following the death of Mwirima which was also another challenging moment to those who knew about him. The Habinyanja gorilla family which was under the leadership of Rwansigazi with its 17 members was taken over by Makara. The Rwansigazi gave way to Makara to take over since he had aged up.
The story of these historical brothers is one of the living wonders in the forest of Bwindi that travelers on gorilla safari in Uganda find interesting.