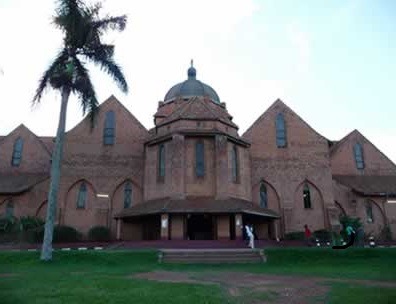 Also referred to as St. Paul’s Cathedral, Namirembe Cathedral is positioned on Namirembe hill in Rubaga division and is one of the iconic Uganda safari attractions that is located within Kampala city. Namirembe Cathedral is about 2 km west of Kampala off the road to Natete.
Namirembe cathedral is the headquarters of the Anglican faith in Uganda and it is among the most magnificent colonial style buildings that still thrives in Uganda up to today and can be encountered by travellers on safaris in Uganda. Literally translated as a place of peace, Namirembe was regarded as a peace paradise in the pre-colonial Buganda.
The initial building was completed in 1903 built by the local builders under the British missionary supervision. In 1910, the building was brought down by lightening prompting the building of the current cathedral which was completed in 1919.
The architectural setting of Namirembe cathedral is something to wonder of while the backyard of this very cathedral has a cemetery where various religious historical people lay in rest including Sir. Albert Cook, Bishop Hannington among others and can be encountered by travellers on Uganda safaris.
Uganda safaris/Uganda safari News
Prime Uganda safaris & Tours Ltd safari News