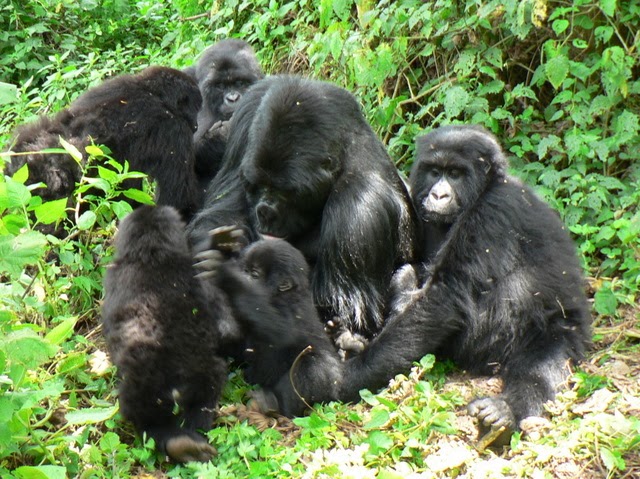 More and more facts about mountain gorillas continue to unveil as the days go by, especially facts that denote some traits of similarity with man. Today we will take our minds on a Uganda mountain gorilla trekking Safari to the Ruhija sector of Bwindi Impenetrable National Park.
Bitukura was named after a stream of clear water where the group was first spotted. This mountain gorilla family surprised Uganda Wildlife Authority (UWA) experts at how fast it was habituated. The average habituation period is around two years but this group’s habituation started in July 2007 and by October 2008, just 15 months later, they were set to receive their first guests on a Mountain Gorilla Safari to Bwindi Impenetrable National Park. Perhaps this speedy habituation was because they often saw UWA rangers heading to the Kyaguriro mountain gorilla family when it was still undergoing habituation.
At its first sighting, the family had up to twenty four (24) individuals previously led by Karamuzi as the alpha silverback. However Karamugi has grown old (over 40 years) and the group needs a stronger and a more agile leader. Normally the leader of the family is the oldest silverback but this is not the case for this mountain gorilla family; the group’s second youngest silverback called Ndahura is now the leader.
Sadly, the big numbers have been reduced to 14 members over the years, with cases of some traitors joining other mountain gorilla groups. Ndahura is followed by three other silver backs including Karamuzi, Rukumu and then Rukara the 4th silverback. They have two infants a number of females, juveniles and two stubborn blackbacks.
Amusingly, about two years back tourists got to physically see the wrath of an angry mountain gorilla parent. Just as parents sometimes give their kids a spanking for misbehaving, so did Ndahura give Obia (one of the blackbacks) the beating of his life. Ndahura was in his solitude times but Obia kept on pestering him, like he was suggesting a fight. Well he will surely not be seen doing anything similar pretty soon because of the weight of wrath and strength that he felt descend on his body from the mighty Ndahura silverback.

Basically the family is nonviolent especially with an alpha silverback like Ndahura who leads like he has the perfect blueprints to leadership at the back of his head. The group schedules termly, sometimes monthly get-togethers with their neighboring mountain gorilla family called Kyaguriro. Today tourists can purchase tickets in order to enjoy a Uganda Mountain Gorilla trekking Safari to Ndahura’s Bitukura family in the Ruhija sector of Bwindi Impenetrable National Park.