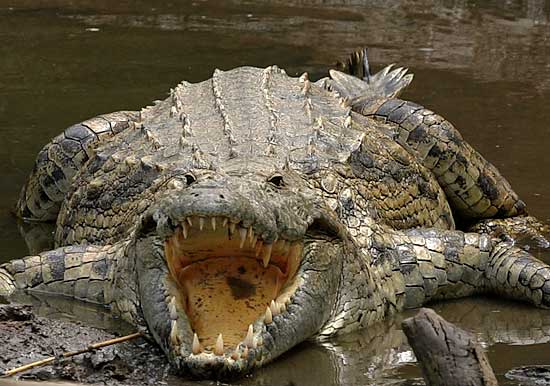 Scientifically referred to as Crocodylus niloticus, the Nile crocodiles are one of the popular aquatic species that are always sought after by travellers on Uganda Safaris and Tours.

The Nile crocodile is noted to be the world’s second largest reptile coming in after the salt water crocodile and is spread across the areas of Sub Saharan Africa including Uganda where it is explored during Africa holiday safaris in Uganda.  It thrives in various environments including; Rivers, lakes and marshlands and though it can thrive in saline ecosystems, the Nile crocodiles are seldom live in salt water.

Nile Crocodiles are notably gigantic and a mature male can stretch between 3.5 – 5m in length, 225 to 750kg in weight though specimens with length and weight higher than that given above have also been encountered. They feature sexual dimorphism and the female Nile crocodiles tend to be 30% smaller than the males.

These species are the most aggressive of all crocodile species and as a result, it has the capacity to capture any animal that is within its reach. The Nile crocodile is an Apex predator which gives it an advantage over most of the animals. They consume a range of prey including fish, birds and reptiles along with mammals. It is an ambush predator which waits for considerable hours, days and it can be weeks while anticipating for the perfect time to launch an attack. They use their most powerful bite which is rare in other animals where it inserts sharp conical teeth into the fresh providing for a firm grip that can hardly get loose. Nile crocodiles possess considerable levels of force for a prolonged time period which gives them an advantage in pulling the large prey to drown underwater. Such magical experiences are life time wonders if explored while on boat cruise along the Kazinga Channel in Queen Elizabeth National Park or River Nile in Murchison Falls National Park during your Uganda tour holiday.

Nile crocodiles are social creatures and can share large food sources and basking spots. Their hierarchy is determined by size where the old large males are at the top of it with primary access to best basking spots and food. The rest of the members know their positions in the hierarchy and tend to follow it and failure to do so results into bloody clashes.

Just like other reptiles, the Nile Crocodiles lay eggs which are protected by the female and though the hatchlings receive protection from parents, they feed themselves. The sexual maturity is attained at the age of 12 – 16 years and eggs are laid after one (1) or two (2) months following the mate.

Regarding conservation, the Nile Crocodile are facing a serious human wildlife conflict because of their furious attacks on humans. However, they are not endangered and are listed as species of least concern on the red list of International Union for Conservation of Nature (IUCN).