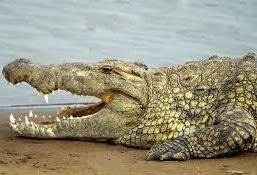 This Uganda safari offer belongs to the order Crocodilia which date back to over 150 million years. The fossil forms of this order existing contemporarily with dinosaurs are remarkably unchanged from their modern ancestors, of which the Nile crocodile is the largest of all living reptiles, regularly mounting up to 6m in length. The Nile crocodile is extensive spread across Africa and was most prevalent in most lakes and large rivers but it has been eradicated in many areas in the previous century due to professional hunting for its skin as well as by vengeful local villagers. Differing from the common tale, these crocodile species largely consume fish when they exist in good numbers. They also prey on swimming or drinking mammals where the chance presents itself, pulling their prey beneath the water until it drowns, then storing it under submerged log or tree before it decomposes enough for eating. A mature large crocodile is capable of killing a wildebeest or a lion or an adult human for example in areas like the Mara or Grumeti Rivers in the Serengeti, large mammals do form their foremost prey. In Uganda apparently, these Nile crocodiles exist in protected areas and can be encountered on your safari in Uganda on the sand banks of the Nile overlooking the magical Murchison falls National Park appearing in a silent and sinister form before disappearing under the water when the launch draws closer. Other reliable sites for sighting Nile crocodiles on Uganda wildlife safari or along your gorilla tracking/trekking safaris are Lake Mburo national park and increasingly Kazinga channel in Queen Elizabeth National Park.