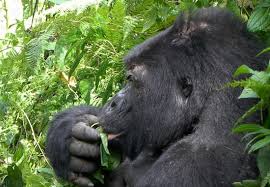 Situated in Rushaga in the south of the gorilla trekking haven of Bwindi, Mishaya gorilla family was part of the greater Nshongi group before Mishaya broke away with females to form this new group. Comprising of 10 members with 1 silverback, Mishaya started up the group in July 2012 and is re-known for his fighting ability that enabled him to expand his group to this maximum. In fact in April 2011, Mishaya fought with a non-habituated group resulting into injury for him and a two (2) year infant. This shows how Mishaya was more than a man to stand in for the sake of his group whose existence has increased the opportunities for gorilla safaris.
It is unfortunate to note that after all those endeavors; Mishaya lost his dear life at an age of 28 on February 3rd, 2014. The Uganda Wildlife Authority trackers found his body on the morning of that very day while patrolling the forest something that left many gorilla lovers in a state of sorrow. The death of Mishaya was sudden as there was no previous record of illness or injury making the explanation of his death wanting. In return, Dr. Fred Nizeyimana along with other Gorilla doctors Dr. Noel and Jan conducted a necropsy in the area of Bubare where the Mishaya’s body was found in sternal recumbency. The other group members were rotating with in the nearby environs but with no disease signs amongst them. Though it is hard to conduct a necropsy when the gorilla body has not been recovered in the forest for the case of Uganda, the doctors were able to comprehensively assess the cause of Mishaya’s sudden death. It was found out that this popular gorilla that was cherished by gorilla trekkers had sustained a 360o torsion of the intestines which put his life to an end within 24 hours. The report according to Dr. Niyezimana shown that;the small intestine was severely strangulated around the root of the mesentery. There were associated hemorrhages and congestion in the mesentery and intestines, as well as mechanical obstruction. The small intestine was distended with gas, the colon had a small amount of firm feces and the rectum was completely empty. This was indicative of complete failure of intestinal/bowel movements. The small intestine torsion led to vascular congestion, gastrointestinal stasis, accumulation of gas. Death in Mishaya’s case can be attributed to circulating toxins produced by the ischemia and/or intestinal bloat leading to heart failure. Samples were collected for histopathology and toxicological analysis.
What is amazing is that such intestinal torsion has never been recorded in gorillas unlike humans and other species of mammals. Upon his death, the black back Mwine filled that gap and has positioned himself to lead the Mishaya gorilla family which is now being encountered on Uganda gorilla safaris like other groups. The time has passed counting to about nine (9) months but the memories of the Mishaya still rotate around those who knew or have ever heard of it.