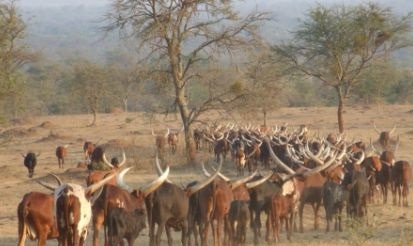 Strategically located just two hours’ drive from Mbarara, the village is nestled in the rolling hills of the Ankole Kingdom. It’s the only place where travelers on cultural safaris to Uganda can explore the highly charming and capacious farm, decorated according to the local customs of the Ankole people. The prominent village is where the eminent long-horned Ankole are reared by thousands and hence taking Uganda safari to this part of world will enable you to milk cows with your bare hands
The village lies right in the Center of the rich Cattle Corridor and is often nick named as “the beacon of light”; the pacing setting example of what others emulate. Although not necessarily an original cliché of the area but often said, is that when Nshenyi village sneezes the rest of the animal corridor catches the cold.
Surrounded by a million hills, large banana plantations and never ending pasture fields, Nshenyi offers a magnificent view and majestic sunsets. From the farm you can enjoy the view of different neighboring countries like Rwanda, Tanzania. The well-known Kagera River meanders at an estimated distance of only 5 miles, forming the natural border between Uganda-Tanzania and Rwanda-Tanzania. This remote source of the Nile originates in the highlands of Burundi and flows its way up north, before ending into Lake Victoria. However, the official way to cross the border with Tanzania is found at Kikagate, 8 miles from the farm. The Mirama Hill, where visitors on Uganda Safari tour can officially enter Rwanda.
Uganda has undisputable heritage of war but one cannot talk about this before mentioning Nshenyi Village. This is because the village has several war remains and one poignant one is the famous remnants of the bombed-out island hotel, passionately loved by Idi Amin. Another monument that stands out in the countryside is the pyramid in memory of Henry Morton Stanley. One of the world’s greatest explorers who under took safaris to Uganda mainly to discover the famous Rwenzori Range and Lake Edward in the early 19th century.
Nshenyi Village is worth to be explored by all the visitors on Uganda Safari tours because the site has unique tourism activities which range from the art of extracting milk from cows, Cultural nights, Traditional cooking ,Combining a pleasant nature walk with a visit to the Bahima Village Hill climbing and local market visit among other interesting activities.
Uganda Safaris/Uganda Safari News
Prime Uganda Safaris & Tours Ltd