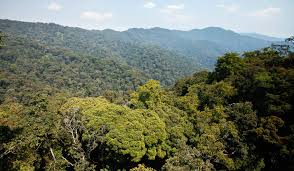 Nyungwe forest is in the southwestern parts of Rwanda bordering with Burundi to the south, Lake Kivu and Democratic Republic of Congo to the west. The forest is one of the best of all the reserved mountain rain forests in central Africa region.

The forest is located between the River Congo basin and the Nile River basin to the east. It is believed that in the east side of Nyungwe forest, there are the branches of the river Nile sources.

The national park was gazetted in 2004 and it covers an area size of 970km of rain forest with bamboo, grassland and swamps. This exclusive national park has attracted many tourists who come in for chimpanzee trekking safaris in Rwanda and many other Rwanda safaris.

Nyungwe forest national park has a big number of wildlife species which have made it a concern for conservation in Africa. The forest is situated in a region in which large scale bio-geographically zones meet and variety of terrestrial biomes provide a great span of micro habitats for many wild species of plants and animals.

The number of endemic wildlife species found in this park is greater than in any other forest in the Albertine Rift Mountains.

This rain forest reaches an altitude of 3000m above sea level and is of particular interest for the presence of the colonies of Chimpanzees and Angola colobus. The other primate species in this forest include; Silver monkeys, L’Hoest’s monkey, Golden Monkey, Hamlyn’s monkey, Red tailed Monkey, Olive Baboon, and the grey checked Mangabey.

This national park has got many more tourist activities which can be engaged in by the tourists on Rwanda safaris and these include; canopy walk, guided walks, golden monkey tracking, chimpanzee trekking and habituation, nature walks, bird watching safaris in Rwanda and many more.