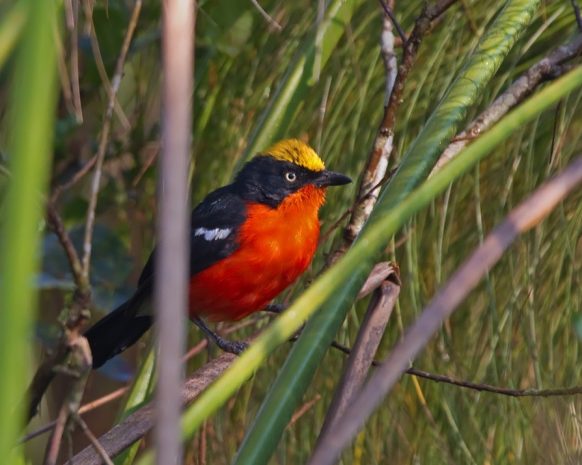 The Papyrus gonolek also referred to as Laniarius mufumbiri belongs to family Malaconotidae and thrives in the destinations of Democratic Republic of Congo, Burundi, Rwanda, Tanzania Kenya and Uganda where it is explored on Africa birding safaris including birding safaris and tours in Uganda.

Standing as a medium sized bush shrike, the Papyrus gonolek stretches to 18cm marked with a dull yellow crown, black head, tail, wings and upper parts except the white bar on their wings. The papyrus gonolek has a whitish lower belly while the upper belly feature an orange crimson as viewed on Uganda birding safaris.

The Papyrus gonoleks thrive in pair or can keep single in the papyrus swamps hanging within the vegetation. They fly few times and cover a short distance across the water to patch in the adjacent papyrus.  The Papyrus gonoleks can be identified by their calls marked with grating and whistling. The diet of the Papyrus gonolek constitutes of majorly insects including; flies, beetles along with ants. They also consume fruit, snails and seeds when available.

This bird species is limited to papyrus swamps in terms of habitat distribution which increases its vulnerability since such habitats are threatened by pollution and encroachment. It is listed on the red list of International Union for Conservation of Nature (IUCN) as the Near Threatened species.

The Papyrus Gonolek is thus considered a water bird and wetland habitats are normally targeted if planning to explore it during a birding safari to Uganda.