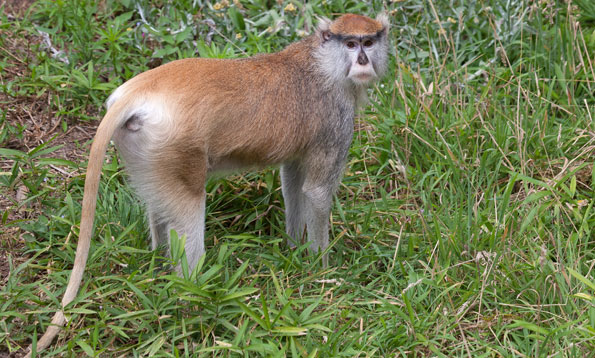 Scientifically referred to as Erythrocebus patas,the Patas Monkey is a notable ground dwelling monkey and one of the rare Uganda Safari tour wildlife products spread in the savannah dry lands of East and West Africa.

The Patas Monkey stretch to 85cm in body length without considering the tail that can stretch up to 75cm. In terms of size, the mature males are visibly larger than females as explored on Safari in Uganda. It is noted to be the fastest runner among all primates reaching up to 55km/h.

Regarding behaviour, the Patas Monkey thrive in multi-female groups with up to sixty (60) members and each group features one male for the greater part of the year. The range of males influx the female groups in the breeding season and when the males reach four (4) years where they attain sexual maturity, they vacate the mother group to join other male groups.

They are known to thrive in open savannah along with semi arid areas and tend to avoid the dense woodlands. The Patas Monkeys can as well live in areas that have been affected by deforestation and in agriculture plantations. No wonder their love for open areas makes them visible in Murchison Falls National Park while on Uganda Safaris.

Regarding diet, the Patas Monkeys are omnivores in nature and as a result, they consume diverse plants along with small animals. They majorly consume acacia fruits, leaves and galls, seasonal fruits, tree gum and flowers. Patas Monkeys also consume lizards, insects and eggs of birds as often viewed on Africa holiday tours in Uganda.

The Predators of Patas Monkeys include; cheetah, leopards and lions while the young ones can as well be hunted by African wild dogs, Hyena, large birds of prey and snakes. People also hunt them for meat and specimens for research.

Regarding conservation, the Patas Monkeys are listed as species of Least Concern on the red list of International Union for Conservation of Nature (IUCN).