Poachers still a threat to mountain gorillas in bwindi Uganda 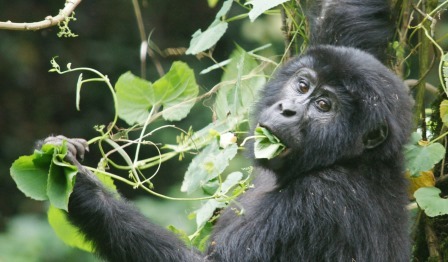 Bwindi Impenetrable National Park is the dominant Uganda gorilla safari site filled with a minimum of the about 400 mountain gorillas of which a considerable section has been habituated to accommodate the people.
The gorillas in Bwindi whose population is close to the a half of their entire global population given at 880 are still prone to poaching despite the concerted efforts to eliminate the threat. The Bwindi forest still harbors other forest animals apart from the gorillas and these include the forest antelopes like duikers. These Species are always a target by the local communities who wish to enjoy bush meat.
One would wonder how then this results into a threat to gorillas that are not edible by the surrounding communities. It can be noted that in a bid to capture the edible forest animals, the poachers set wire snares and traps which at times do not spare the gorillas while on the move. Cases of gorillas getting caught in such snares are still noticed in the famous Bwindi where travelers on gorilla safaris in Uganda gather to track gorillas.
One of the cases occurred on June 17th 2015 when a black back of Habinyanja gorilla group with 17 years in the Buhoma was got hold and unfortunately poachers speared it to death. The black back named Mizaano tried to fight the poachers’ dogs and in return the owners speared it to the last breath. It was a trying moment for those who knew about it including those that have ever encountered on Uganda gorilla safaris.
The Suspects were members of the neighboring Mpungu Sub County in the Kanunu district and included Fidel Byamugisha Fidel, Leonard Byamugisha and Amos Kazongo. The Conservation through Public Health doctors conducted a postmortem and found out that Mizaano experienced a harsh death when the spear penetrated it from the right side of the shoulder damaging the lungs causing suffocation and eventually death.
Such occurences are trying especially when a youthful gorilla like Mizaano is lost. It is a typical threat of gorilla continuity which calls upon renewed efforts to see the cause fully worked upon. The Communities need to be re-sentized again to contuine appreciating the value of conservation and understand that though their target may not be gorillas, they may fall victim in return.