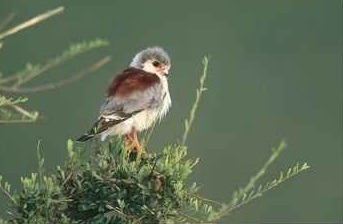 Also known as African Pygmy falcon and scientifically referred to as Polihierax semitorquatus, the Pygmy Falcon is recorded as the Africa’s smallest raptor thriving to the South  and East of Africa where it is explored on Africa birding safaris including birding safaris in Uganda.

The mature Pygmy Falcon is marked by white face and under parts while the top parts are gray with the females marked by a chestnut back. The brown back occur in juveniles duller that the mature females featuring a rufous wash on the breast. The wing flight feathers are marked with white and black spots while the tail is black and white as viewed on Uganda birding safaris and tours. The Pygmy falcon features a low and undulating flight

The Pygmy Falcon thrives in dry bush and its subspecies P. s. semitorquatus exists from northern South Africa to Angola while the P. s. castanonotus exists in Uganda, Tanzania and from Somalia to South Sudan. The habitat range is estimated at 2.7 million km2 while their total global population stands between 100,000 and 1 million birds.

Regarding the nesting, the Pygmy falcons tend to nest in the nests of white headed buffalo weaver and the dwelling range of these species overlap. They can as well nest with the sociable weavers which tend to have large nests with many chambers. Surprisingly, the Pygmy falcons tend to leave the nest owners alone even though they are bigger in size and bird –eaters. However, a few cases of catching nestling along with adults occur.

Due to their small size stretching from – 19 to 20cm in length, the Pygmy Falcons tend to prey on small reptiles, inspects along with small mammals.

In Uganda, the Pygmy falcons can be explored in the Uganda Safari destination of Kidepo Valley National Park.   And the species are listed as least concern on the IUCN red list.