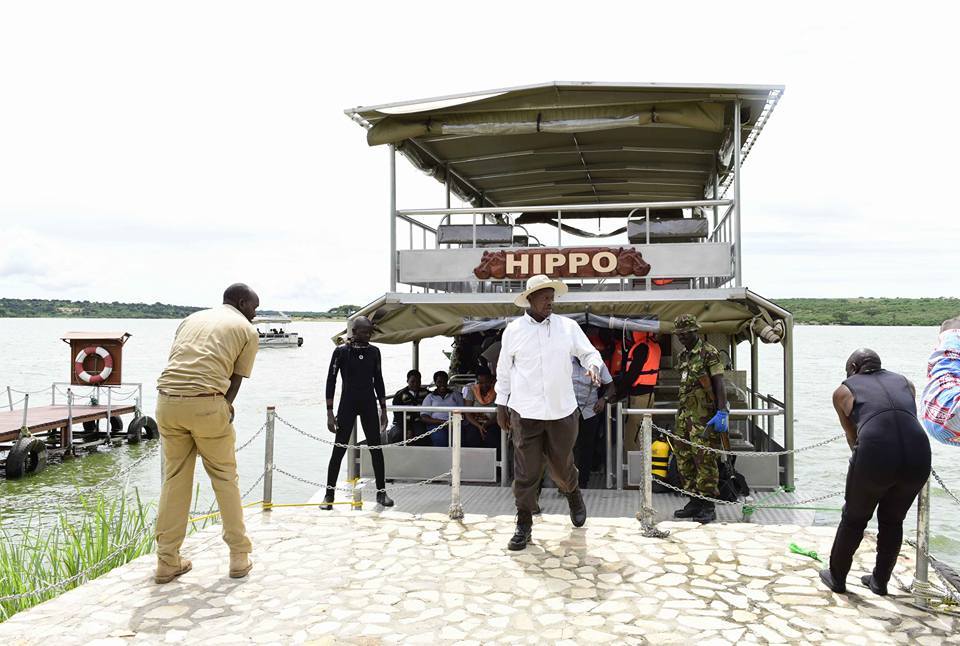 Amidst very tight schedules, President Museveni is hailed to have spared time to visit some of the tour Uganda Safari sites at the beginning of April 2016. Thanks to the Kasese clashes that prompted the President’s visit to the region of Rwenzori on the security assessment mission.

Following the security unrest that characterized the region of Rwenzori in the after mass of elections which included alarming killing of people including security personnel, many of the government officials visited the region including President Yoweri Museveni. On his security assessment mission, the President also managed to identify time to visit the Uganda Safari tour destinations in the region.

It is recorded that the President visited Semliki Valley National Park in the district of Bundibugyo on April 6th 2016 exciting the revelers including the Uganda Wildlife Authority staff and the visitors on safaris in Uganda that had visited the park. The President undertook the famous Sempaya Nature Walk exploring the remarkable hot springs and the lush forest cover not forgetting its inhabitants like monkeys and birds. The Sempaya walk is a famous activity in the park allowing the safari Uganda enthusiasts to explore the male and female hot springs namely; Bitente and Nyansimbi with a boiling geyser of over 100 degrees Celsius and up to 2m sprout.

When still on the very mission, the President embarked on another tour to Queen Elizabeth National Park one of the most visited park in the country and a re-known UNESCO Biosphere Reserve. His visit on April 12th was welcomed y a lot of excitement not only by Park management but also the range of lodges accommodating travelers on Uganda Safaris and tours like Mweya Safari Lodge and other visitors as well.

The President explored the savannah stretches of Queen Elizabeth National Park including the Kasenyi plains which is the park’s main wild game viewing haven with possible sights of the four of the Big five namely; Lions, Buffaloes, Elephants and Leopards along with other animals like Uganda Kob, deffassa water buck, spotted hyena, side stripped jackal, the Topis among others. Besides Kasenyi landscapes, the President was also astonished by the recreational and yet fascinating launch cruise on the famous Kazinga Channel which connects Lake George and Lake Edward dotted with numerous Hippos and the world’s second largest reptile – the Nile crocodile along with a range of bird species including; Open Billed stork, grey heron, fish eagle, pink backed and gray white pelican, great and long tailed cormorants, saddle-billed stork and the wild game drinking on the shoreline like Buffaloes and Elephants not forgetting the overlooking Rwenzori Mountains – the legendary mountains of the moon.

The President’s visit to these sites acted as an assurance to the traveling world of the peace and security in these sites and an encouragement to the natives to cherish domestic tourism take up Uganda Safaris to these magical sites in their motherland.