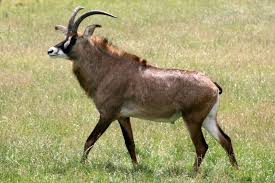 Also referred as Hippotragus equines, the Roan Antelope is a savannah dwelling antelope that thrives in many parts of Sub-Saharan Africa including Rwanda where it is encountered on wildlife safaris in Rwanda.

The Roan Antelope is recorded to be among the largest antelope species stretching from 190 – 240cm in length from head to the tail base while the tail along stretches between 37 – 48cm. The Male Roan Antelopes feature a body size stretching from 242 – 300kg while the females stretch between 223 – 280kg. They are named after their Roan colour which is reddish brown marked with lighter underbellies, black faces, white cheeks and eye brows as viewed on Rwanda Safaris and Tours.

Roan Antelopes are marked by erect short manes, prominent red nostrils and light beards. They have ringed horns which can stretch to a metre in males and a little shorter in females. These horns tend to slightly arch backwards.  The Roan Antelopes somehow resemble the sable antelope and in areas where their ranges overlap, they are often confused. However, the Sable antelope males tend to be darker (black) other than dark brown.

Regarding the habitat, the Roan Antelope thrives in savannah grassland and woodland especially in the sub tropical and tropical lands.  They live in groups of 5 – 15 individuals led by a dominant male. The fighting for dominancy normally occurs in males brandishing their horns while both are on their knees. This is one of rare but most exciting sights if encountered on a wildlife safari in Rwanda Africa.

Regarding conservation, the Roan antelopes are listed as species of least concern under the IUCN red list. In Rwanda, they are only found in Akagera National Park to the East of the country and are among the most sought after species in the park by travelers on Rwanda tours.