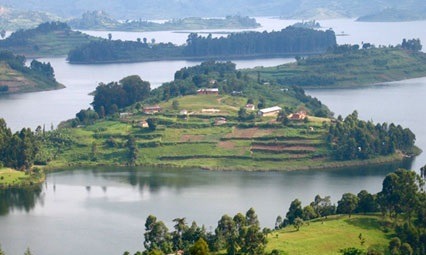 Positioned to the South West of Uganda, Rubanda is one of the newly created districts which commenced operations on 1st July 2016. The district shares boundaries with the districts of Kanungu, Kisoro and Kabale. In fact Rubanda was a county under Kabale district but with the government initiative of bringing services close to people, the county turned into a district. Rubanda feature Bakiga majorly as its inhabitants but with a population of the Batwa not forgetting Bafumbira and the Banyarwanda who emanate from the neighboring areas presenting a culturally diverse environment that is worth exploration by travelers on Safaris and tours in Uganda.

Sitting at the heart of the famous Switzerland of Africa – the Kigezi Highlands, Rubanda’s beauty is a wonder that have straddled from the ancient to the contemporary times mesmerizing the Uganda safari tour undertakers. The top-pointed hills intercepted by V-shaped Valleys present a magnificent panoramic and scenic beauty whose man has further enhanced with rolling terraces and patches African green crops.

The Africa’s Second deepest lake more known for its magnificent 29 Islands other than its depth which has earned it the dub as the Lake of a thousand Islands, Lake Bunyonyi is a life time paradise for those on Africa vacation holidays in Uganda. Formed by lava barricade, Lake Bunyonyi presents one of the great picturesque moments in destination Uganda

Rubanda also features a great deal of high grade Iron ore mineral resource close to Muko which the local iron smelters locally referred to as Abahesi turn into tools like knives, pangas, spears and hoes sold commercially following the iron smelting process. This expertise and the process present an experiential touch loved by visitors on Uganda Safaris and tours. Other mineral reserves in the district include finest tungsten, wolfram, gold and peat.

Though Rubanda features less forest cover in terms of distribution, the district has in possession at Mafuga the largest forest plantation in the whole of Uganda and the only known pinus patula seed stand at Echuya Forest Reserve which has enabled people to embark on extensive tree planting for commercial and domestic use. The Echuya Forest Reserve which is one of the remaining natural forests in Uganda with Bamboo thrives in the area.

Bwindi Impenetrable National Park lies in the neighborhood with its largest population of Mountain gorillas in the country forming a rich base for gorilla safaris and tours in Uganda. Bwindi is also a haven for birds and lush flora.