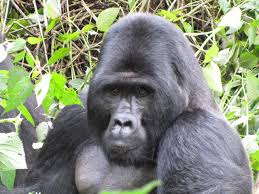 The Rukina Silverback was one of the magical mountain gorillas that used to mesmerize travelers on gorilla safaris in Uganda. Belonging to the Kyaguliro gorilla family which is one of the three (3) gorilla groups that are found in the Ruhija region to the eastern side of Uganda gorilla safari destination of Bwindi Impenetrable National Park, Rukina Silverback left the life of this world on April 6th 2015 but five (5) months down the road, its memories still linger in the hearts of those that knew about it.
Born in 1984, Rukina Silverback rose to become a notable member of Kyaguliro gorilla group in the late 1990s at the onset of his Silver-back life. He managed to secure the name Rukina accruing from his playfulness while he was still living the black back life. The trackers, researchers and veterinarians got fond of it and this raised its reputation making it a point of interest when the group was introduced for gorilla trekking officially to the visitors on gorilla trekking safaris in Uganda
The profoundness of Rukina did not stop at playing but also the persistent struggle for the Silver-back status. He struggled for three consecutive years with the then Silverback Zeus and eventually attained the triumph in the month of August 2004. The fecal sample genetic analysis demonstrated that Rukina sired the initial offspring even he was still a subordinate black back far back in 2002.
The fertility of Rukina was not questioned either. It is noted that during his reign, he managed to sire ten (10) off spring most of which were still infants at the time of his demise. The present of infant population made the Kyaguliro gorilla group fun filled and rewarding to explore on gorilla safari in Uganda. Rukina did not only rely on breed and multiply programme to increase her group; it also managed to secure other 4 members from outside to add on his family which justified his efforts as a good leader.
The Rukina Silver-back was noted to be a tolerant silver back that would find enough time for his family attending to the adult females along with the infants. And at the time of his death, Rukina left the group with a count of 21 members which featured eight (8) mature females as would be explored by the travelers on Uganda gorilla safaris.
The works of Rukina are not only local but international as well. The silver back played a considerable role in the understanding of the mountain gorilla ecology and social behavior in the Bwindi Impenetrable National Park. The profoundness of Kyaguliro gorilla group made it and its group a center of attention by the Max Planck Institute of Evolutionary Anthropology for research in the year 1998. The gorilla group and Rukina itself was filmed in various documentaries including one that featured on the world’s re-known BBC thus increasing mountain gorilla publicity on the globe and stimulating world travelers to plan gorilla safaris to Uganda.
Though Rukara managed to succeed Rukina successfully as the Silverback of Kyaguliro, the memories of Rukina still linger!