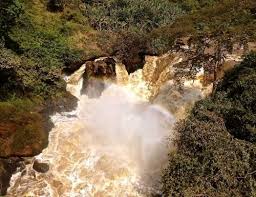 Rusumo Falls is Rwanda’s beautiful waterfall found in Kagera River bordering Tanzania and Rwanda. The water falls forms about 15m high and 40m wide of Precambrian schists and Quartzophyllites. The water falls is very important in Rwanda’s history because they make the only linking point on the river in that area. Thus Rwanda safari offers you the opportunity to enjoy a trip along this ancient bridge.

Looking at its history, the water falls was used as a link by the first Europeans to have arrived in Rwanda in 1894 from Tanzania. Gustav Adolf von Gotzen a German man entered in Rwanda from Tanzania and continued to the palace of king Mwami at Nyanza up to Lake Kivu. The Belgians also used the same route to enter Rwanda. This waterfall was the only bridge at that time to connect to Rwanda which makes it an important Attraction for your safari visits to Rwanda.

The water falls became even well-known internationally during the Rwanda genocide which claimed thousands of life.  The water falls was used by people fleeing from the genocide to take refuge in Tanzania and also thousands of dead bodies were thrown underneath the Bridge Thus a place you do not want to miss visiting while on Rwanda safaris.

Akagera national Park is one of the National Parks found in Rwanda which is visited by tourists while on Rwanda safari. The national park obtained its name from Kagera River where Rumuso falls are found. Visiting Rusumo falls will offer you a chance to see other attractions which the national park has stored for you.