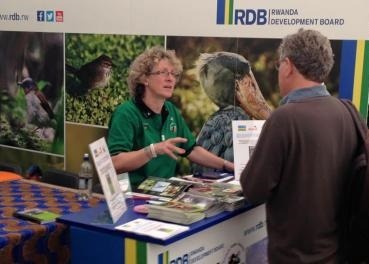 The destination Rwanda participated in the Stockholm based TUR Travel Fair 2015 with the intention of increasing the number of Rwanda gorilla safari undertakers hailing from the rich Nordic state.
The travel fair which was conducted at the Stockholm Waterfront Congress Center in the down town of Stockholm interested a range of professionals in the tour and travel industry along with the buyers who might develop interest of taking gorilla trekking safaris in Rwanda at a later date.
The high wage combined with the long paid holiday and the intractable weather qualify the Nordic countries to be among the leading per capita sources of the travelers / tourists in the world.
Considering the fact that Rwanda features almost everything that the continent of Africa has at disposal making it a one stop shop, it stands as a rich destination for mountaineers as it features mountains including Karisimbi and the Bisoke, wild game viewers as it features rich wild game in Akagera National Park, the primate trackers as it features mountain gorillas and the Chimpanzees along with colobus monkey among others presenting a ground for the Rwanda gorilla trekking safaris, birders as it supports a great deal of birds range from savannah dwelling to moist montane forest and the swamp dwelling birds and eventually the great Culture and Heritage that marks the uniqueness of Africa.
The fair was warmed up by the Imanzi which is a Rwandan Cultural Troupe based in Stockholm that presented the remarkable performances of the Rwanda traditions and heritage. The event also featured prolific speakers including Sweden Uppsala University Student Erika Lejon Flodin who transcribed her remarkable experience that she had while living and touring Rwanda for a period of Six (6) weeks. She commended Rwanda for her fascinating landscapes, safe atmosphere and the flora and fauna which are actually the ideals of a good safari destination thus invigorating the world travelers to undertake Rwanda safaris including gorilla safaris to Rwanda
Sweden along with other Scandinavian Countries are notably known to be the originating areas for counts of avid hikers that would definitely find the landscapes of Rwanda, the climate along with the safety appealing. The travel fair that lasted for 2 days notably attracted thousands of visitors.