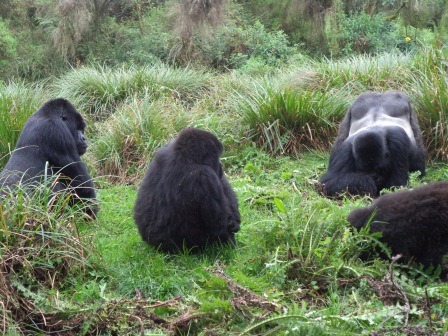 Today visitors come on a safari holiday in Rwanda to see the famous mountain gorillas though occasionally add up a uganda safari and stay for 4-6 days and then go back home which is shame because there plenty to see on a safari to Rwanda. With 4 national parks, a thriving Kigali capital city, spectacular highland scenery and diverse wildlife, Rwanda safaris have plenty to occupy on a longer holiday safari and certainly deserves more exploration.

The genocide saga is part of its history and today 22 years Rwanda has evolved into a united, optimistic and proud country that warmly welcomes all visitors and provides a truly memorable safaris and inspiring holidays.

Where to go on a Rwanda holiday!

Volcanoes National Park is located in the north western part of  Rwanda and is the most famous of all Rwanda’s 4 national parks and most people come to this park on holiday to Rwanda because of its famous residents, the mountain gorillas.

Rwanda gorilla trekking safari experience is its biggest attraction though less is known on holiday options of Akagera National Park on the eastern border of Rwanda and Tanzania and Nyungwe Forest National Park in the southern part of the country.

Akagera national park is the only park famous for ‘traditional’ safaris in Rwanda as it offers amazing wildlife opportunities. Akagera scenery is beautiful and is described as Rwanda’s Lake District that is worth visiting for that alone.

The tracking of mountain gorillas in Rwanda is an ultimate wildlife experience and is the reason why most of the people go there for a safari holiday.

Sitting within a small related group of gorillas, is a ‘must’ see for serious wildlife lovers.

This is the area where Dian Fossey first brought the whole world’s attention to these primates in the 1960s, when only about 250 survived. Today the number of worldwide gorilla populations has increased to 880 split between Rwanda, Uganda and Democratic Republic of Congo.

Survival of the mountain gorillas is one of Africa’s leading conservation stories and tourism has played a majestic role in this.

Rwanda safaris are regarded as probably the best safaris for gorilla tracking experiences and although gorilla tracking permits are not cheap, tourists are permitted an hour with these amazing apes which turns out to be a priceless encounter that remains with you long after your safari holiday is even over.

Though the mountain gorillas are stars, there are plenty of other primate tracking opportunities while on a safari in Rwanda.

Nyungwe Forest National Park in the southern sector is home to 13 different primate species among them includes the chimpanzees, Rwenzori colobus and the red tailed monkey both of which can be tracked.

Indeed, Nyungwe forest national park colobus monkeys can on several occasions be seen in spectacular troops of hundreds and is believed to be among the largest numbers all over the world.

Volcanoes National Park is home to two groups of the endangered golden monkeys which have been habituated for visitor tracking.

Rwanda may not seem to be one of the obvious choices for a typical holiday safari, unless one travels there.  Akagera National Park in the east of the country and at the Rwanda Tanzania boarder is worth exploring and experiencing.

Rwanda scenically is home to one of Africa’s prettiest parks blessed with deep valleys and rolling hills, savannah plains in the north, lakes and papyrus swamps close to the eastern border.

It also includes the largest protected wetlands in the whole of Central Africa region and is also home to about 8,000 animals and 480 plus species of birds that include the elusive shoebill making Akagera national park an interesting place for bird watching safaris in Rwanda.

Safaris in Rwanda and when to go

Safaris in Rwanda are possible all year round, but the most popular time to travel is during the long dry season from June-September and the short dry season around December-February.

In case one intends to track gorillas, he will need to plan for the safari well ahead to secure the gorilla permits especially in the July-September season.

The main rainy season in Rwanda is from March-May with shorter rains in October- November.

Travel in Rwanda on a safari is very comfortable the roads are largely good with many new roads being constructed to replace old dirt roads.

A glimpse to the heart of the contemporary Africa for some wonderful wildlife viewing is thought to be provoking travel yet it finally turns out to be a fascinating safari holiday.

Whilst this it would be naive to suggest that the entire Rwanda nation has moved on whereby a holiday safari in Rwanda leaves you with an overwhelming sense of people’s optimism and Rwandese pride with determination that genocide must not happen again.