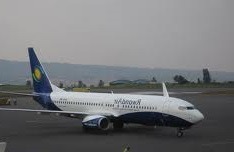 The country of Rwanda well known for her gorilla trekking safaris and wild life safaris made her first attempt in the aviation sector in 2008. The Rwanda Air Express became the initial brand name for the aspiring aviation sector though was not recognized by the International Air Transport Association (IATA). The carrier did not have aircrafts but survived by leasing some from Kenya based company.

This sort of arrangement came to an end after the clash of the leased aircraft at the airport’s terminal just after a year in operation which prompted the Rwandese to resort to buying their own fleet. Overtime, the fleet has expanded to eight aircraft’s and still adding and the carrier has positioned its self in the region as a reliable actor.

Rwanda has not only concentrated on international connections but also has a network of domestic connections across its provincial airstrips. There is a range of helicopter offering Ariel adventures across her prime Rwanda safari destinations. In fact in Akagera National Park, there is Helicopter adventure as an epitome of wildlife safari experiences in Rwanda.

The dream of establishing a competent aviation sector in Rwanda definitely incorporates smooth travel of Rwanda safari undertakers and the attempt to make connections to different parts of the world would definitely increase safaris to Rwanda.