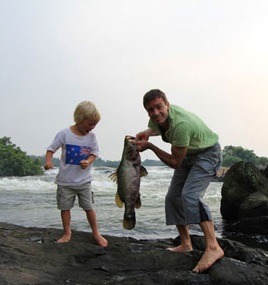 With almost 1/3  of Uganda being covered with different water bodies such as lake Victoria, river Nile, lake Edward, L.Albert, swamps, sport fishing is one of the famous and enjoyable tourism activities which make Uganda a unique destination and the highly rewarding activity gives memorable experiences to tourists on their Uganda safaris. Sport fishing activities in Uganda’s lakes, rivers, swamps is done by expatriotes and even international fishermen on their safaris in Uganda because the different water bodies provide wide range of opportunities where international fishermen on the safaris to Uganda to check on their strength and line when Uganda’s respected Nile perch of one hundred pounds bites.
The Adventurous sport fishing in Uganda is mainly done on the waters of Lake Victoria and also visitors on wildlife safaris in Uganda’s Murchison Falls National Park can participate in the activity in the waters of river Nile which bisects the park into two parts. The magnificent activity n Uganda’s largest protected area is done in the foot hills of Murchison falls. The activity gives chance to fisher men to encounter the Nile perch which tends to weigh over 108 kilograms and the other species of fish which can be caught include the Tilapia which tends to weigh over 50kg as well as Tiger fish and Ngara ferocious among others.
The two banks of the southern and northern Nile found below Murchison Falls offer interesting, exciting but challenging experience to international anglers on Uganda safaris and tours to Murchison falls. The fishing activity is done on the rocks as well as the lower downstream in the pool of boats used by anglers in the Victoria Nile. The activity is backed up with the views of the wonderful roaring Murchison falls as well as sights of different bird species which are sighted roaming in the banks of the Nile River were sport fishing is done.
For so long, many international anglers undertake safaris to Uganda fish the Nile Perch fish species however the tiger fish as well as electric cat fish now these offer more experience excitement to anglers and the tiger species are considered to be the most aggressive of all the fish species living in the fresh waters in Uganda the land surrounded by water bodies. Uganda safari destination of Murchison, Lake Albert offer tourist on their safari tours to Uganda to spend time fishing the tiger fish with the help of alight spinning rod as well as light line among other means.
Fishing competitions are conducted by Uganda wildlife authority in Murchison falls and the recent competition attracted over 60 international anglers who under took safaris to Uganda to participate in the memorable activity and the winner who was from south Africa had rare experience of pull Nile perch worth 120 kilograms.
Uganda Safaris/Uganda Safari News
Prime Uganda Safaris and Tours Ltd